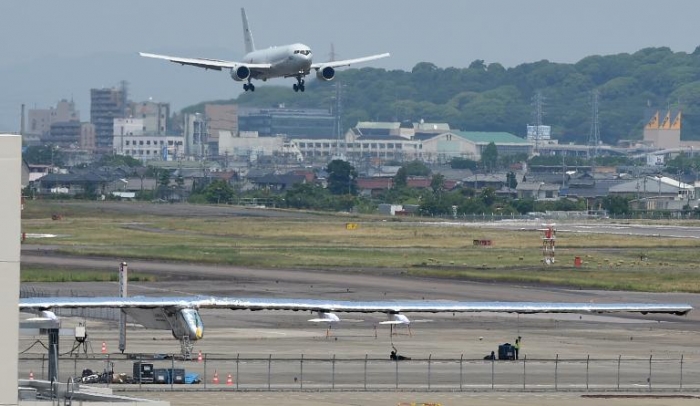 The pilot of record-breaking Solar Impulse 2 pledged on Tuesday to continue his adventure after the high-tech aircraft made an unexpected stop in Japan to avoid bad weather.

The landing in Nagoya, on Japan’s main island, concluded what had been the aircraft’s longest non-stop period of flight.

But it nevertheless cut short what was due to have been a marathon trip across the Pacific Ocean, the longest single leg of an effort to raise awareness of green energy by circumnavigating the globe powered only by the sun.

“#Si2 is now parked in Nagoya. What a flight! Looking forward to continuing this adventure with @bertrandpiccard,” pilot Andre Borschberg tweeted early Tuesday, referring to the mission initiator and fellow pilot Bertrand Piccard.

A small ground crew had been waiting in central Japan to deal with the unplanned landing just before midnight local time (1500 GMT).

The main support crew was expected to fly in from Nanjing, China, later Tuesday, bringing, amongst other things, a huge inflatable hangar that needs to be assembled in sections to cover the plane, including its 72-metre (236-foot) wings.

Solar Impulse 2 was trying to fly continuously from Nanjing to Hawaii, and planners had expected the 8,500 kilometres (5,250 miles) to take six days and six nights of non-stop flight, with onboard batteries charging up during the day.

But a developing cold front in the Pacific Ocean that forecasters said Borschberg would encounter as he neared Hawaii made the crossing risky, mission controllers decided, ordering the pilot to divert to Japan instead.

At an impromptu press conference around an hour after he touched down, Borschberg told reporters that the diversion was no problem for the success of the mission.

“I would say it has no impact,” he said, adding it was a “great pleasure” to be in Japan, a place he lived 30 years earlier.

Curious locals gathered in a park near the airport Tuesday, hoping to get a glimpse of the record-breaking plane, which has 17,000 solar cells and weighs just 2,300 kilograms (5,000 pounds).

LEDs that festoon the huge wingspan gave the plane an ethereal look as it glided in to land on Monday night, with a taxi driver telling one reporter his fares had been speculating it could be a UFO.

The landing was live streamed on the project’s website, with viewers treated to scenes of jubilation and relief from the Monaco mission control room as the plane touched down.

Despite having been cut short by several days, the flight from China notched up at least one first — Solar Impulse 2 managed to fly day and night powered only by sunshine for the first time.

The round-the-world attempt began in Abu Dhabi in March and was originally intended to be completed in 12 legs, with a total flight time of around 25 days.

It was not supposed to include a stop in Japan, but, as the last bit of land before the vast stretch of the open Pacific, it had always been a possible backup destination.

The mission’s well-oiled PR operation wasted no time, posting messages on their Twitter feed in Japanese, thanking the nation for its support.