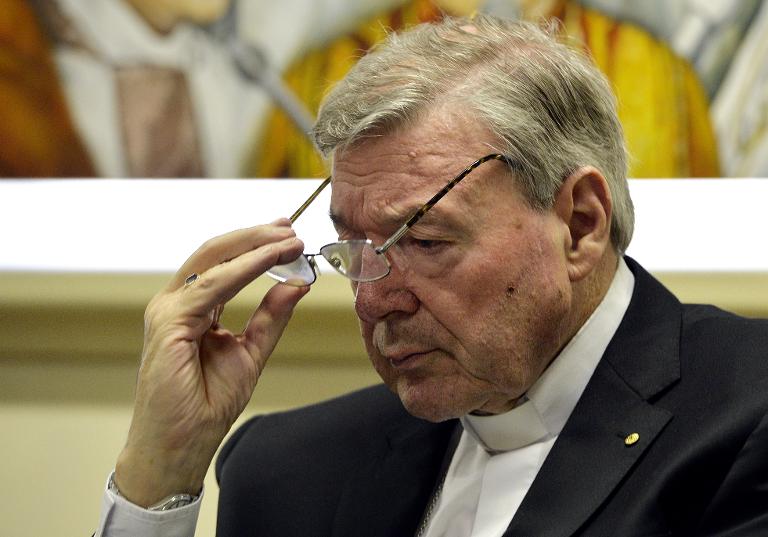 Vatican finance chief George Pell on Monday summoned his lawyers after one of Pope Francis’ specially-appointed commissioners for the protection of children accused him of being “almost sociopathic” and said his position was untenable.

Formerly the top Catholic cleric in Australia, Cardinal Pell is embroiled in a child abuse inquiry in his homeland which last week heard evidence from the nation’s worst paedophile priest Gerald Ridsdale.

Pell, who accompanied Ridsdale to court in 1993 when he admitted widespread abuse, has repeatedly denied knowing about any offending, helping move the priest to another parish, or claims he tried to bribe a victim to keep him quiet.

That victim — one of at least 50 boys abused by Ridsdale — was his nephew David Ridsdale. He alleged he confided in family friend Pell about the assaults and that he was asked what it would cost to buy his silence.

Other victims have demanded Pell, who was appointed by Pope Francis in February 2014 to make the Vatican’s finances more transparent, return to give evidence in person to The Royal Commission into Institutional Responses to Child Sexual Abuse.

The cardinal said last week he was willing to do so.

Peter Saunders, who was hand-picked by the Pope six months ago to be one of the church’s commissioners for the protection of children, said Pell not only had a moral obligation to return but should be removed from his Vatican role.

He alleged in an interview with Australia’s Channel Nine on Sunday evening that Pell had acted with “callousness, cold-heartedness, almost sociopathic I would go as far as to say, this lack of care”, towards abuse victims.

“Given the position of George Pell as a cardinal of the church and a position of huge authority within the Vatican, I think he is a massive, massive thorn in the side of Pope Francis’s papacy if he’s allowed to remain,” added Saunders, a British survivor of child sexual abuse.

“And I think it’s critical that he is moved aside, that he is sent back to Australia, and that the Pope takes the strongest action against him.”

A statement issued by Pell’s office said the allegations were “false and misleading”.

“From his earliest actions as an archbishop, Cardinal Pell has taken a strong stand against child sexual abuse and put in place processes to enable complaints to be brought forward and independently investigated,” it said.

“Cardinal Pell has never met Mr Saunders, who seems to have formed his strong opinions without ever having spoken to His Eminence (the Pope).”

The statement added that “in the circumstances, the cardinal is left no alternative but to consult with his legal advisers”.

The royal commission was called after a decade of pressure to investigate wide-ranging allegations of paedophilia in Australia.

It has heard harrowing allegations of child abuse involving places of worship, orphanages, community groups and schools. Pell previously gave evidence to the commission, in person, in March 2014.