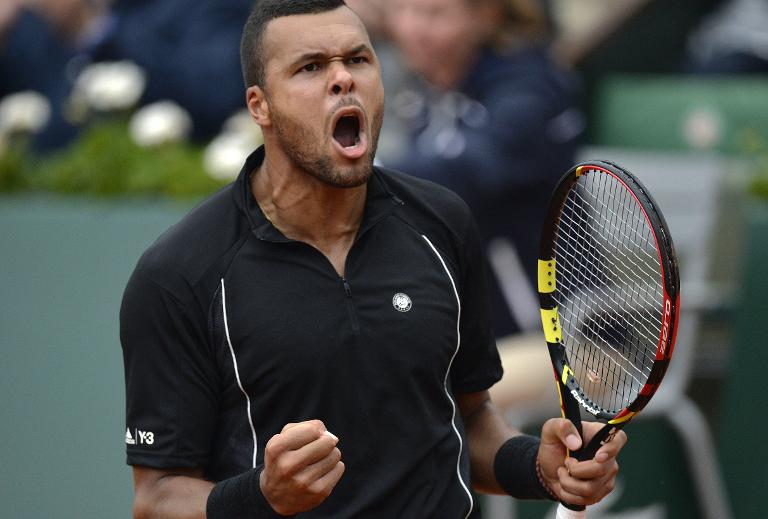 Jo-Wilfried Tsonga beat fourth seed Tomas Berdych at a weather-hit Roland Garros on Sunday, winning their fourth round tie 6-3, 6-2, 6-7 (5/7), 6-3 on a day of mixed fortunes for French hopes.

The 14th seed’s emphatic win was followed by a loss for Gilles Simon, who went down 6-1, 6-4, 6-2 to eighth seeded Swiss Stan Wawrinka.

Then Gael Monfils saw his contest with Roger Federer suspended due to poor light with the score level at one set all. It will resume Monday afternoon with the winner going up against Wawrinka.

In the other match completed, Japan’s fifth-seeded Kei Nishikori comfortably saw off the challenge of Russia’s Teymuraz Gabashvili and he will be the next opponent for Tsonga.

Berdych looked out of sorts from the start against Tsonga in the cold, damp conditions that marked the tournament’s second Sunday, allowing the French favourite to dominate rally after rally with his powerful serve and shot-making.

The Czech player rallied briefly in the third set as Tsonga’s level dropped, but after a brief scare at the start of the fourth set, Tsonga won five games in a row to move through.

The 14th seeded Frenchman will take on Nishikori with the prospect of reaching what would be just his second appearance in a French Open semi-final.

“It was not easy because I played really well during three sets. And when it was time to finish I played a little bit differently and because he’s a good player, he came back in the match,” Tsonga said.

“Then I started to miss a little bit more. But I had a good reaction in the fourth, and finally I won it. So it’s good for me. I’m happy to beat a guy like this — one of the best at the moment.”

Tsonga was one of five French players into the last 16, equalling the best home showing at Roland Garros in the Open-era since 1968.

But on the two previous occasions that happened, only one man reached the quarter-finals.

His win briefly raised French hopes, but they were soon let down when current French number one Simon was thrashed by Wawrinka, the 2014 Australian Open winner who is perfectly at home on clay, having grown up playing on the surface in Lausanne.

“It was perfect and I am happy to have won the match. I had been expecting a tough match against Gilles, but I played very well, aggressive, as the conditions were slow,” Wawrinka said.

The Monfils-Federer match always looked likely to be unfinished at the end of the day as darkness started to fall to add to the gloomy conditions as they took to the court.

Second seed and 2009 champion Federer dominated the opening set, with Monfils looking exasperated at times with the wind and the cold.

But as ever, the French showman dug deep and found some fresh reserves to level the set scores before the match referee called both men to the net and they all agreed to sleep on it.

The two other Frenchmen into the last 16 — Richard Gasquet and Jeremy Chardy — were down to play their ties on Monday with Gasquet against top see Novak Djokovic and Chardy facing third seed Andy Murray.

No Frenchman has won at Roland Garros since Yannick Noah in 1983 and prior to that it was Marcel Bernard in 1946.

Nishikori’s win made him the first Japanese man in 82 years to reach the French Open quarter-finals.

Jiro Satoh was the last Japanese man to enjoy such a run in Paris when he went on to the semi-finals in 1931 and 1933.

Nishikori hadn’t played since Wednesday after scheduled third round opponent Benjamin Becker withdrew with an injury.

Asked about his thoughts about taking on Tsonga in the last eight, Asia’s top player, who reached the final of the US Open last September, said he expected it to be a “fun match.”

“We haven’t played for a long time, maybe couple of years,” he said.

“But, you know, he was injured and he came back now and he’s coming back very strong. You know, he has a big serve, big forehand. He’s always a dangerous player.”