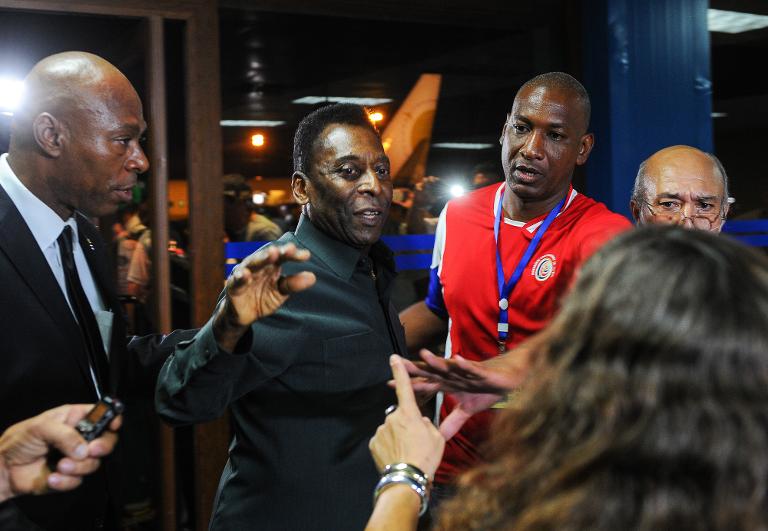 The New York Cosmos will kick off a new era in sporting relations between the United States and Cuba on Tuesday when they become the first professional American sports team in 16 years to play in the Communist-ruled island.

A blizzard of camera flashbulbs from local media and fans greeted a Cosmos delegation led by Brazilian legend Pele after the soccer team touched down late Sunday in Havana on a private charter flight.

Former Cosmos star Pele, who has battled a series of health problems in recent months, was mobbed by well-wishers before being whisked through security with the rest of the squad.

Tuesday’s exhibition match against the Cuban national team at the Pedro Marrero Stadium reflects the rapidly thawing ties between the United States and Cuba.

Moves to normalize relations after a bitter five-decade schism began last year when the two nations announced a historic rapprochement.

The diplomatic milestone has already shown several signs of extending into the sporting arena.

Cuban officials announced last week that the Baltimore Orioles baseball team — the last professional US team to play in Cuba back in 1999 — would return later this year to play against the Cuban national team.

It was the first time Cuba had screened a match involving one of its legion of MLB players, who are, officially at least, barred from playing in the United States and often portrayed as “deserters.”

Planning for Tuesday’s match began earlier this year, when the Cosmos first sounded out officials in the US and Cuba about the possibility of organizing a game.

“It became pretty real pretty fast, and we had to just take the steps in good order and get everybody on board. Whether it was the State Department, Justice Department, White House,” Cosmos chief executive Erik Stover said.

“We went down (to Washington), very quietly, and they were immediately supportive,” Stover added.

“It’s sort of cliche to talk about ‘ping pong diplomacy’, but they picked up on that immediately. They were all on board right away.”

The project gathered pace when Cosmos coach Giovanni Savarese traveled to Jamaica in January and met Cuban officials on the sidelines of regional qualifiers for the Under-20 World Cup.

“I had the chance to come to the president of the Cuban national federation, I said ‘We would like to play a match against you’. At the beginning, he said ‘Okay, let’s talk about it. Where are you coming from?’

“I said ‘New York, and we are the New York Cosmos.’ His eyes opened up.”

For the Cosmos, Tuesday’s match is in keeping with the team’s evocative history, an exotic nod to their famous 1970s heyday when they lit up the North American Soccer League with stars such as Pele, Franz Beckenbauer and Giorgio Chinaglia.

Though the Cosmos do not play in the biggest US league, Major League Soccer, competing instead in a resurrected NASL, they remain one of the most globally recognized brands in US football, a testament to the club’s glittering history and willingness to take their show on the road.

They have played friendlies in Hong Kong and El Salvador already this year; Cuba will be the 42nd country the team has visited.

“No other team, past or present, gets close,” said Cosmos chairman Seamus O’Brien. “The club has a history of traveling overseas, opening doors.

“This happened naturally, very quickly. There was instant reciprocity from both sides, wanting to do the game.”

“We are extremely privileged and honored to accept this opportunity and hope that our match will be an important step forward in growing the popularity of the global game in Cuba and improving relations between the two nations.”