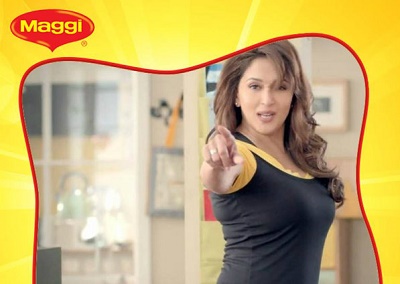 New Delhi: Maggi brand ambassadors including Bollywood star Madhuri Dixit were Monday warned of action by the Central Government if the advertisements for the noodles were found to be misleading.

The warning came even as the probe into alleged lapses of food safety standards in Maggi noodles, a popular Nestle brand, was widened with the government saying it is testing samples from all states and that strict action will be taken for any violation.

The tests are being done by the central food safety regulator FSSAI (Food Safety and Standards Authority of India) and the reports are expected to come in the next 2-3 days.

A case has been lodged against Nestle India by UP food regulator FSDA in a Barabanki court in Uttar Pradesh over safety standards of its product Maggi.

To a query on any action against the Maggi brand ambassadors, Consumer Affairs Additional Secretary G Gurucharan said, “Yes, they would be liable for action if the advertisements are found to be misleading.”

Elaborating, he said, “It becomes a misleading advertisement if it is found that the product does not have the attributes that the manufacturer professed. And if the brand ambassador has promoted that product and said specifically that the product has those attributes, they are also certainly liable for action,” Gurucharan said.

While Bachchan today said he no more endorses the brand, Dixit recently met Nestle officials in this regard and said the company has assured her about the quality of the product.

Food and Consumer Affairs Minister Ram Vilas Paswan was also asked about the Maggi probe at a press conference here on the one-year achievements of the ministry.

“In case of Maggi, we have gathered information. UP Food department has investigated and they have found monosodium glutamate (MSG) and lead. Now, FSSAI has taken up the issue. It will take the action,”

Nestle has maintained that it does not agree with the UP food regulator’s order and it “is filing the requisite representations with the authorities”.

Regarding the expanded probe, Gurucharan said, “FSSAI has taken samples from every state. Testing is going on. Not only MSG and lead, all other parameters are being tested.”

He said that some test reports were expected soon and the rest could come in the next 2-3 days.

“If any violations are found in the sample report, both FSSAI and the Consumer Affairs Department through NCDRC will take some class action,” Gurucharan said.