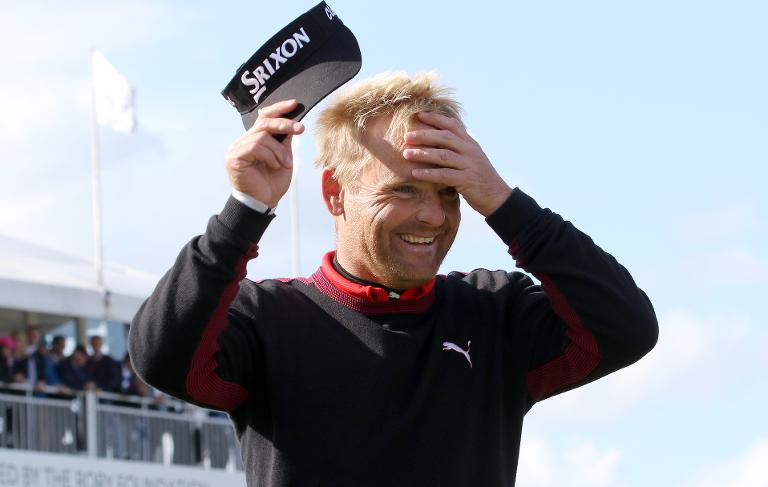 Soren Kjeldsen held his nerve to become the third Danish-born winner of the Irish Open on Sunday in winning with a ‘horse-shoe’ birdie at the first extra play-off hole on the Royal Count Down course.

The 40-year old London-based player went into the final leading by two shots but saw that disappear in starting his final round with back-to-back bogeys.

Kjeldsen then slipped further behind with a double bogey at the eighth before coming to the last hole and needing to hole a short par in an eventual round of a five over par 76 to join England’s Eddie Pepperell (69) and Austrian Bernd Wiesberger (73) in a play-off.

Kjeldsen then holed a four-foot birdie putt at the first extra hole, but only after the agony of seeing his putt loop around the cup before disappearing to also end a six-year winless drought in capturing a fourth Tour victory.

And there was the added bonus for Kjeldsen in securing a place into July’s Open Championship at St Andrews.

Among the first to greet Kjeldsen was world number one and tournament host Rory McIlroy who had missed the halfway cut.

“It is amazing to be holding the trophy but then I felt good coming into the tournament,” he said.

“I played well in my last two tournaments and while I was not in contention I had the chance today to change all that.

“But then I have to say it was both exciting and nerve-wracking as it’s been a long time since I’ve been in contention”.

Kjeldsen earned a first prize cheque for 586,444 euros as well as a two-year Tour exemption.

There was the added bonus for Kjeldsen in securing a place into July’s Open Championship at St. Andrews with three places available to three players not otherwise exempt who finished the Irish Open in the top-10.

“I have not played in the bigger tournaments like the Majors and the WGCs for a very long time and while I have played in all four Majors back in 2008, 2009 and 2010, but then not much happened.

“But then you reach 40 and you start to wonder will you ever get back to playing those bigger events like playing the Masters or will I ever play The Open again.

“But then I kept waiting and kept working hard on my game so this win is a huge step back towards playing in all those big events again.”

Joining Kjeldsen in earning an Open Championship place was Pepperrel and South African Tyrrell Hatton (74) who shared fourth place at one under par.

Tyrrell denied Spain’s Rafa Cabrera-Bello (75) who also finished on one under par by virtue of his higher World Ranking, albeit by six spots from the Spaniard with the South African ranked 142nd and Cabrera-Bello 146th.