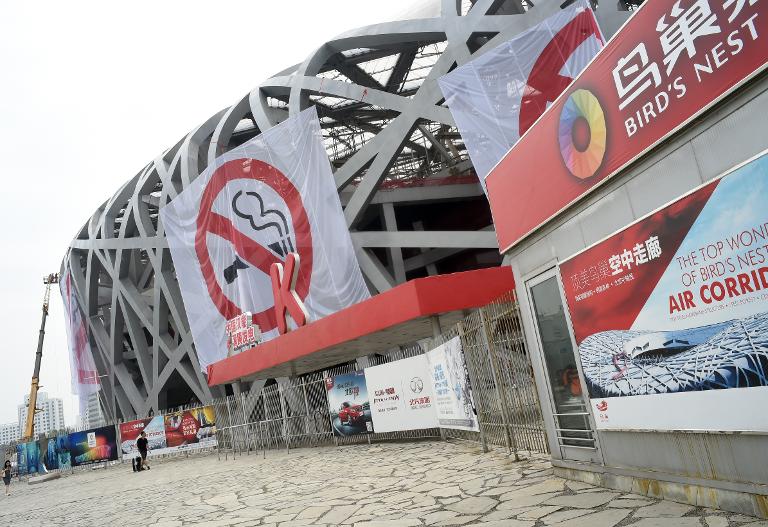 The toughest anti-smoking legislation in China’s history came into effect on Monday in Beijing, with unprecedented fines and a hotline to report offenders but fears of weak enforcement.

The law makes smoking in offices, restaurants, hotels and hospitals illegal, with venues where the ban is flouted subject to fines of up to 10,000 yuan ($1,600).

Venues which repeatedly ignore the law could have their licenses revoked, while individuals caught smoking in prohibited zones could be fined as much as 200 yuan.

As well as indoor smoking, the law prohibits lighting up in some open-air spaces close to schools, hospitals, and sports venues.

Despite a government awareness campaign that saw posters detailing the law displayed in restaurants and offices around the city, many doubt authorities will implement it effectively.

Nightclubs had been singled out as a potential problem area, Zhang Jianshu, president of the Beijing Tobacco Control Association, told the China Daily newspaper.

“The key lies in the business owners,” the paper quoted Zhang as saying Monday. “They have the responsibility to ensure no smoking within their establishments.”

The measure “fails to make clear who is ultimately responsible,” for implementation, leaving the possibility that authorities will “pass the buck to each other”, state-run newspaper Beijing Youth Daily said.

Health commission inspectors will be in charge of enforcing the law, carrying out spot-checks and acting on tip-offs from the public.

Posters in the capital advertise a hotline number for tip-offs, and the city government has launched a social media account allowing observers to upload images of smokers caught in the act.

But some restaurants visited by AFP on Monday were unaware of the regulations.

“I haven’t heard of the specific law banning smoking, but we follow all rules and regulations,” said a Beijing noodle shop manager surnamed Chen.

Some eateries said they wanted to enforce the law, though it could hurt business.

“We normally allow people to smoke inside at night, but we’re going start stopping them from tonight,” said Zhang Lin, a manager at a Japanese restaurant. “Some people might be very unhappy though, and after all, the customer is god.”

Other businesses had set up outdoor seating in order to provide space for people to smoke. But waiters said they were unsure what would happen during Beijing’s freezing winter months.

The law — limited to the capital — is not China’s first such effort.

A similar nationwide measure was passed in 2011, albeit without financial sanctions, and implementation was lacklustre.

Environmental and safety laws in China are often openly flouted because of limited official oversight, or corruption in the form of bribes to law enforcers.

“The new regulation should require tobacco producers to print a warning on cigarette packages,” Jiang Huan, vice-director of the Chinese Center for Disease Control and Prevention, was quoted as saying by the China Daily.

A barrier to imposing similar measures across the country is the continued clout of China’s state-run tobacco industry, which provides the government with colossal amounts of money — 911 billion yuan in taxes and profits in 2014, an increase of 12 percent year-on-year.

China’s tobacco regulator shares offices and senior officials with the state-owned China National Tobacco Corp, which is by far the world’s biggest cigarette producer and has a near monopoly in the country.