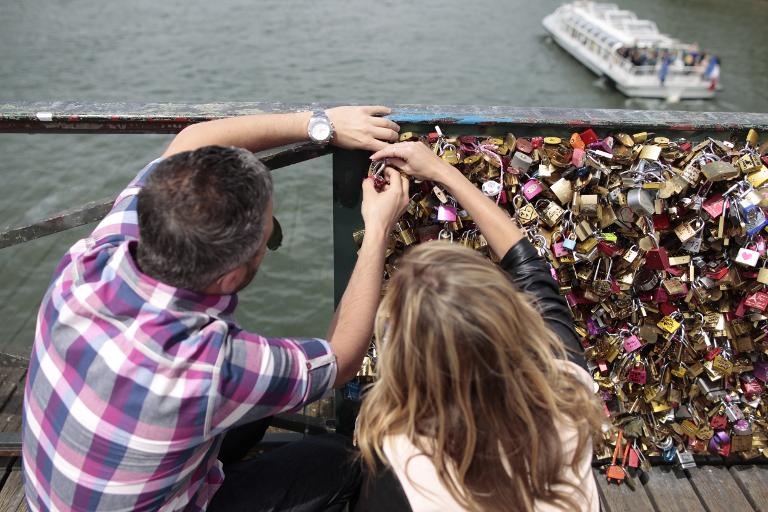 Paris, known worldwide as the city of romance, Monday began the heart-breaking process of removing tens of thousands of “love-locks”, padlocks chained to the city’s bridges by love-struck couples.

Yellow-vested officials were out early Monday morning on the city’s iconic Pont des Arts, wielding cutting equipment to free the padlocks while a handful of curious tourists looked on.

Loved-up visitors from around the world have for years written their name on padlocks to symbolise their passion, then tossed the key into the River Seine so that nothing could ever break the bond.

Or at least, that’s what they thought.

What is for couples a harmless act of passion is for city authorities a potentially dangerous headache.

Last year police hurriedly ushered tourists off the Pont des Arts when a section of the footbridge collapsed under the weight of the locks covering the 155-metre-(509-foot-)long bridge.

Plastic panels were put up in places to deter lovebirds and authorities launched a drive to get tourists to upload selfies instead of attaching a lock.

But nothing stands in the way of true love, and tourists have kept piling the locks on the bridge and elsewhere, forcing authorities to take drastic measures.

“We will remove nearly one million padlocks, or 45 tonnes,” said city official Bruno Julliard, criticising the “ugliness” of the locks on some of Paris’s most beautiful bridges.

While the trend of attaching locks to the Pont des Arts began in 2008, the problem is not unique to Paris.

It is unclear where the idea of using the lock ritual to symbolise love originated, but the padlocks bearing lovers’ initials have spread from European capitals to as far as Marrakech and China.