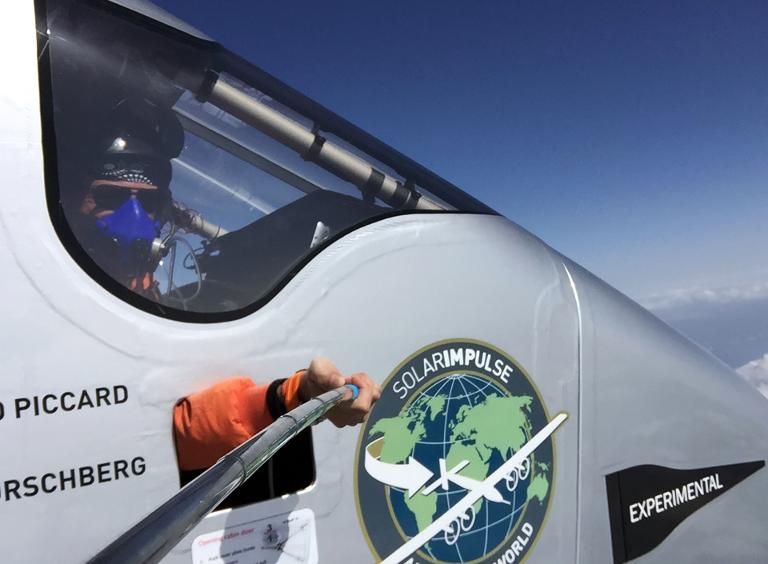 Solar Impulse 2 was in a holding pattern near Japan on Monday as organisers warned that bad weather in the days ahead could block the aircraft’s ambitious bid to cross the Pacific Ocean.

The seventh leg of the round-the-world journey was set to take pilot Andre Borschberg, 62, on a six-day, six-night flight from the Chinese city of Nanjing across the Pacific Ocean to Hawaii, an 8,500-kilometre (5,270-mile) flight.

Borschberg completed Solar Impulse 2’s first overnight leg, with the aircraft relying solely on batteries charged by the sun’s energy, but poor weather ahead threw the rest of the marathon flight into doubt.

“Yesterday we had the possibility to cross the weather front just before Hawaii on day five,” the Solar Impulse team said in a statement.

“However, with the forecasts we now have, we don’t see this possibility anymore, which means that for the moment the road to Hawaii is blocked.”

Borschberg will stay in a holding pattern over the Sea of Japan, a map on the team’s website showed.

“Whilst we wait for the forecasts, we have decided to hold the position of the aircraft. We have asked Andre to stay where he is,” the statement said.

Pilot Borschberg put a positive face on the apparent delay in the Pacific flight.

“Waiting over the Japan Sea with Solar Impulse to catch the right weather window,” he tweeted.

“I am in the best possible position: I have a wonderful airplane and plenty of energy.”

Organisers still held out the possibility of continuing the leg, however.

“During this time we will analyse where he will have to go to find a possibility to cross that front,” the statement said.

The flight from Nanjing to Hawaii is the longest section of the maiden solar-powered global circumnavigation, an attempt to promote green energy.

The journey began in Abu Dhabi in March and is scheduled for 12 legs, with a total flight time of around 25 days.

Speaking on Saturday hours before the departure from Nanjing, Borschberg told reporters that the plane could land in Japan in case of technical problems, but the open ocean offers no such possibility.

“In case of emergency, we have Japan on the way, so we have identified airports where we could stop but this only really is in case of very difficult technical problems,” Borschberg said.

“As soon as we leave this part of the world, then afterwards we are in the open sea. There is no way to come back.”

Failure could mean a parachute descent into the ocean, hundreds of kilometres (miles) from rescue.

No ship is trailing the plane as it travels far too fast for a maritime vessel to keep up with, even though its maximum speed of 140 kilometres an hour is much slower than conventional jet aircraft.

Solar Impulse 2 is powered by more than 17,000 solar cells built into wings that, at 72 metres, are longer than those of a Boeing 747 and approaching those of an Airbus A380 superjumbo.

The plane is the successor of Solar Impulse, which notched up a 26-hour flight in 2010, proving its ability to store enough power in lithium batteries during the day to keep flying at night.