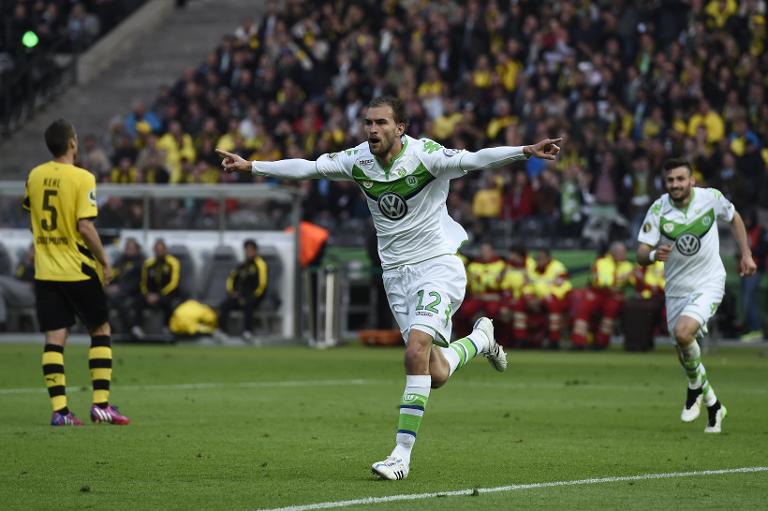 Jurgen Klopp was denied a title on his final appearance as Borussia Dortmund head coach on Saturday when Wolfsburg claimed a 3-1 victory in the German Cup final.

Dortmund’s plans to send Klopp off in style after seven years in charge were spoiled by first-half goals from Wolfsburg’s Luiz Gustavo, Kevin de Bruyne and Bas Dost to give their club a first cup final victory.

Having led Dortmund to the 2013 Champions League final after winning the Bundesliga in 2011 and claiming the German league and cup double in 2012, this was Klopp’s final bow before Thomas Tuchel takes over next season.

The defeat means Dortmund must now go through the qualifying rounds for the Europa League having missed the chance to claim a direct entry had they won the final.

Dortmund fans chanted Klopp’s name after the final whistle, but he said it was little comfort after the defeat.

“It was a great thing to hear, but that had nothing to do with the defeat,” he said.

“We’ve grown together over the years, but it wasn’t any comfort after the result.

“We won’t be celebrating the defeat, but there will be a farewell party and I had hoped we’d win to be able to avoid having to qualify for the Europa League, but it’s not meant to be.”

Wolfsburg finished second only to Bayern Munich in the German league this season and claimed their first German cup title in their 69-year history, exactly 20 years after reaching their last final.

It was the first time goal-line technology was used in Germany, but there was no doubt about any of the four goals in a frenetic first-half.

De Bruyne, as he has been all season, was outstanding and the attacking midfielder was a constant menace to the Dortmund defence.

It was the 24th goal of what has been an outstanding season in all competitions for the Gabon striker, who has scored in all four rounds of the cup on Dortmund’s march to their third final in five years.

But Wolfsburg hit back as Brazil defender Naldo fired in a free-kick and fellow Selecao international Luiz Gustavo scored after Dortmund goalkeeper Mitchell Langerak had parried the original shot on 22 minutes.

Wolfsburg went ahead for the first time when midfielder Daniel Caligiuri trapped the ball for de Bruyne, who hit his shot inside Langerak’s near post for his 16th goal of the season on 32 minutes.

Borussia were left reeling when former Dortmund midfielder Ivan Perisic fired in a cross and Dost headed home at the far post on 38 minutes to claim Wolfsburg’s third.

Wolves started the second-half where they had left off with De Bruyne’s defence-splitting pass founding Dost, who was only denied by Langerak’s save at close range.

Klopp put on Poland internationals Lukasz Piszczek and Jakub Blaszczykowski for the final 20 minutes, while Aubameyang’s free-kick forced Wolfsburg goalkeeper Diego Benaglio into a save as time ran out for Dortmund.