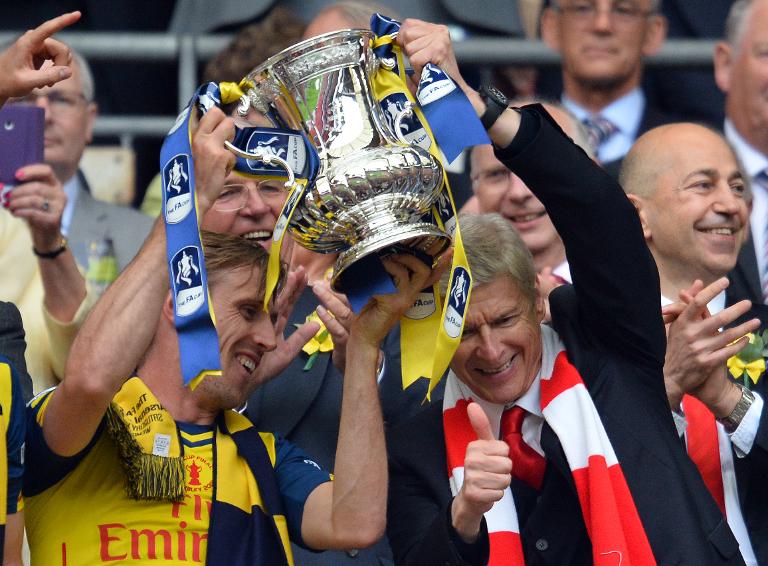 Arsene Wenger has challenged his Arsenal stars to use their FA Cup final masterclass as inspiration to mount a serious bid for the Premier League title next season.

Wenger’s side made history at Wembley on Saturday with a 4-0 rout of Aston Villa that underlined their renaissance in the second half of the campaign and served as a warning to English champions Chelsea.

Goals from Theo Walcott, Alexis Sanchez, Per Mertesacker and Olivier Giroud ensured Wenger became the first post-War manager to win the FA Cup six times, while the Gunners are now the most successful club in the history of the famous old competition after lifting the trophy for the 12th time.

It was also the biggest FA Cup final margin of victory since 1994, but even those gaudy statistics don’t do justice to the potential impact of Arsenal’s stylish display.

After a spluttering start to the season that raised renewed questions about Wenger’s future, the Frenchman and his team have got their groove back over the last few months, rattling off a long winning streak to climb to a third place finish in the league before winning the Cup.

Now, 11 years after they were last crowned kings of England, Wenger is willing to talk bullishly about a sustained assault on the title and even invoked the memory of his famous ‘Invincibles’, who went undefeated en route to winning the league in 2004.

“I feel we have made progress since the start of the season for sure, in the way we play, the way we manage games and our togetherness as well,” Wenger said.

“We finished third and won the Cup. It’s a good platform to do well next season.

“It’s about consistency at the top level. We have shown signs of consistency.

“Remember we are the only ones who didn’t lose for 49 games. Nobody else has done it.

“When we have that kind of strong consistency we can challenge.”

Arsenal’s revival has been helped by the loosening of the purse strings at the Emirates Stadium, with the big-money acquisitions of Sanchez and Mesut Ozil over the last two years adding guile, grace and big-game know-how to a team of notoriously brittle confidence.

And the assured way they dealt with Villa, highlighted by Sanchez’s brilliant long-range strike, gave Wenger confidence he doesn’t need to invest in many more new signings over the close-season.

“We will see what is going on in the transfer market, but we already have a good basis and a good confidence level,” he said.

“Lets be intelligent in the summer. Of course we can push on. We have won the league before when we had the potential to do it. Lets do it again.”

Even a football obsessive like Wenger wanted to focus on enjoying the fruits of a hard season for a few hours at least however and he dodged any further questions on potential transfer targets.

“I’m not in a buying (players) mood tonight. I will just buy a drink for my players!” he said.

Grim-faced Villa manager Tim Sherwood was more forthcoming about his plans for next season as he surveyed the wreckage of his team’s failed bid to win the Cup for the first time since 1957.

Sherwood earned plaudits for helping Villa avoid relegation following his arrival in February, but the way his players meekly accepted defeat on Saturday only emphasised how much rebuilding still needs to be done to a squad grown used to underachievement.

“The group needs to get better, they need to change their mentality because quite a few of them are too used to losing matches,” Sherwood said.

“The job was to come and keep the team in the division which I managed to achieve, but I have to improve this team.

“The process starts immediately. Some of the boys have already been told they won’t be here next season. I had to be honest with them.”