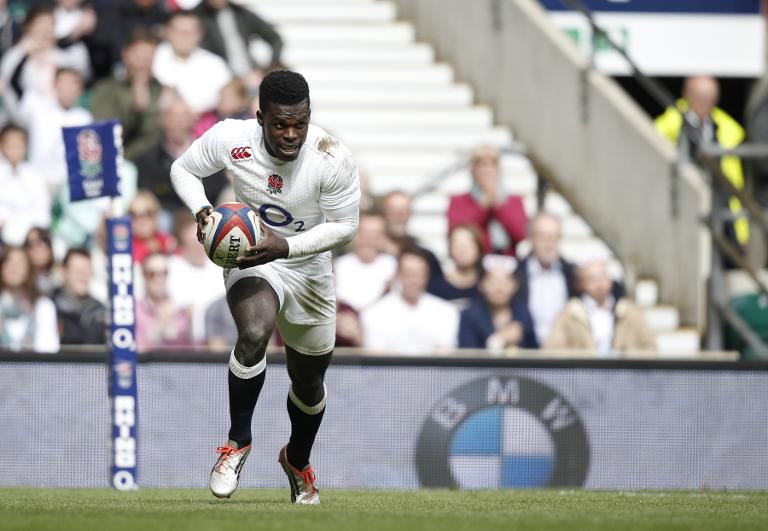 Christian Wade served notice to England head coach Stuart Lancaster after being left out of his World Cup training squad, with his hat-trick helping inflict a record 73-12 defeat on the Barbarians at Twickenham on Sunday.

It was a one-sided affair from virtually the start with wave after wave of white jerseys queuing up to cross their rivals line, and doing so with considerable ease to the dismay of Barbarians coach Robbie Deans.

The Barbarians previous biggest loss was 59-8 to the British and Irish Lions in Hong Kong in 2013. It was also England’s biggest points tally against their rivals and Danny Cipriani set a new individual points record for an opposing player with 33 points including two tries.

It was 11 kicks out of 11 for Sale Sharks fly-half Cipriani as England’s fringe players took full advantage of the opportunity to press their World Cup claim by the August 31 deadline as they gave the Barbarians a heavy and painful beating.

Lancaster was certainly smiling for the first time at the end of a fairly disruptive and difficult few weeks which have seen the head coach needing to reassess his training squad plans due to player suspensions.

“It was hard to pick 50 for the training camp and even tougher to eventually get it down to 31 by the end of August,” said Lancaster.

“A lot of the boys have enhanced their prospects with the way they have handled themselves this week and their performances.

“Christian Wade took his chance well. He is electric in open field and he is so difficult to stop when he gets going!

“Danny kicked 11 out of 11 which is excellent. He has learned discipline from Sale and understands the mechanics of playing at No10 and improved himself.”

But the disappointment of having both Manu Tuilagi and Dylan Hartley ruled out of the World Cup due to on and off the field indiscipline, was countered by watching many aspiring youngsters and experienced players put up on a try-scoring feast.

The writing was on the wall for the visitors as they trailed 45-5 by half-time and clearly losing confidence and hope. They also had two men sent to the sin bin during the game in Thomas Waldrom and captain Brad Thorn.

Former All Blacks hero Thorn produced a rare moment of Barbarians joy in the first-half as he forced his way over from close range after Thomas Waldrom’s break.

Cipriani kicked a penalty and Barbarians lost Waldrom to the sin bin for pulling back England scrum-half Lee Dickson as he kicked on after they had turned over the ball at a ruck.

England made good use of their man advantage as they mauled their way over the Barbarians line with Leicester flanker Ed Slater rising with ball in hand. Again Cipriani added the extras.

Harlequins flanker Jack Clifford waltzed over for another converted try as the Barbarians defensive line broke apart. Suddenly, it was one way traffic at the end of the first half with Wasps wing Wade strolling over for a brace of tries as England’s expansive game left the Barbarians clutching at thin air.

Cipriani, hoping to press his claims for the No10 England jersey with a rare start at Twickenham, crossed the line next for try number six.There was no let up for the Barbarians who had beaten Ireland 22-21 a couple of days earlier, but were no match for England.

“It was all about momentum,” said Barbarians coach Robbie Deans.

“Had we managed to score a try or two early on when we had the ascendancy then things might have been different but once England got that momentum they grew in confident and started shifting the ball around.”

The pain and anguish for the visitors continued with centre Henry Slade getting the seventh try early in the second half. Waldrom dived over for a second try for the Barbarians which Tusi Pisi converted.

A sublime through the legs pass from replacement Shane Geraghty set flanker Beaumont through for England’s eighth try.

Veteran Thorn was shown a yellow card for tip tackle on England replacement prop Alex Waller and missed the final ten minutes of the match.

Wade completed his hat-trick six minutes from time and Cipriani went over for his second to leave the Barbarians shell shocked.