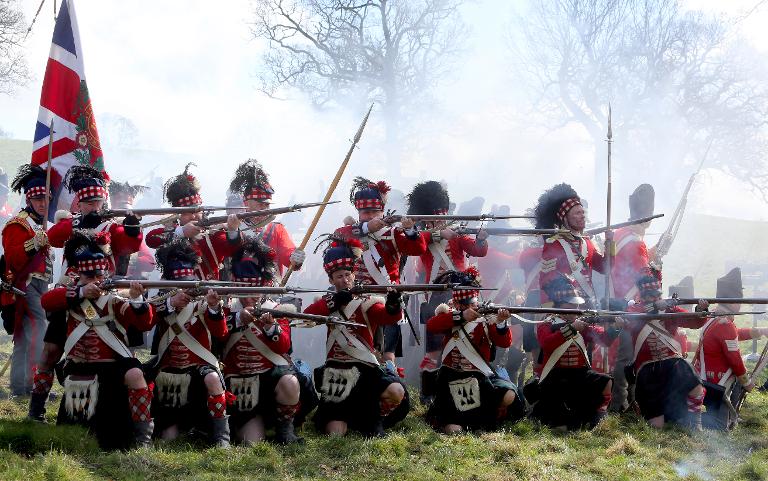 A squadron of Napoleon’s army pant up the path that leads to Stoney Hill Wood, a copse of beech trees chosen for an ambush of the Duke of Wellington’s redcoats.

“Vive l’Empereur!” shout the troops as they advance through the English countryside. “Vive Hollande!” shouts one joker, before being reprimanded.

Staying in character is vital to the business of re-enactment, and 300 British enthusiasts fighting for both sides are in training for one of their biggest ever gigs — restaging the Battle of Waterloo to mark its 200th anniversary.

Below the copse, near a little stone bridge, two French soldiers in grey coats lie on their backs as if dead.

They have been motionless on the grass for the past hour, despite the risk of sunburn.

“I will die this weekend, and more than once,” said Brian Bullock, a 61-year-old who works in a psychiatric hospital but for now is transformed into a French sapper.

He cuts an impressive figure with his salt and pepper beard, loose-fitting white leather apron, a sawtooth sabre and heavy axe hanging from his belt.

Paul Wisken, 60, is a retired IT support worker.

Today, he is a corporal in an elite French unit, although he has in the past played a duke as well as ordinary soldiers.

“I have had hundreds of lives,” he told AFP.

The troops will be part of 5,000 re-enactors in Belgium on June 18, bringing to life a legendary battle in which Wellington and the Prussian general, Gebhard von Bluecher, won a definitive victory over Napoleon.

Practising their manoeuvres in the grounds of the 18th-century Ickworth House, deep in the English countryside, the British enthusiasts are a glorious sight in their bright uniforms, with cannon roaring and muskets crackling.

Fortunately, there are many good deals to be had on the Internet for shakos — military caps — sabres and rifles, and those here believe the outlay is well worth it.

“When you have a high pressure job, it’s a way to leave the 21st century behind and just become somebody else for the weekend,” Wisken said.

There is also a strong sense of camaraderie, he added: “You’ll buy a beer in the evening for the man you’ve shot on the battlefield.”

There is similar enthusiasm among the red-coated troops of Wellington’s army, where Steven Hars, a publisher with metal-rimmed spectacles, is barking orders.

“It’s keeping history alive,” he said, complaining that this period is taught badly in schools — a view that seems to be supported by a recent survey that found 14 percent of Britons believe Napoleon won at Waterloo.

Michael Haynes, at 46 the same age as both Wellington and Napoleon on the day of the battle, is a major general commanding his international forces from a tent.

“When you stand on the original battlefield in real uniforms with all the people involved, you get a very tactile experience,” he said.

“Instead of reading about the heat, the dust, the smell of the powder, you are there experiencing it.”

He added: “We practise death. It goes bang, people fall over. People throw themselves all over the place and they get wounded and they scream. We got a good display.”

George Kypros, wearing a kilt to signify his membership of the 42nd Royal Highland Regiment (The Black Watch) has come all the way from Australia to take part.

He takes it very seriously, pointing out his attire is “a proper uniform, it’s not a costume” and recounting the numerous campaigns of his character.

In a nearby field, the re-enactors take up their positions, the bugles announce the attack and the air crackles with the sound of Brown Bess muskets.