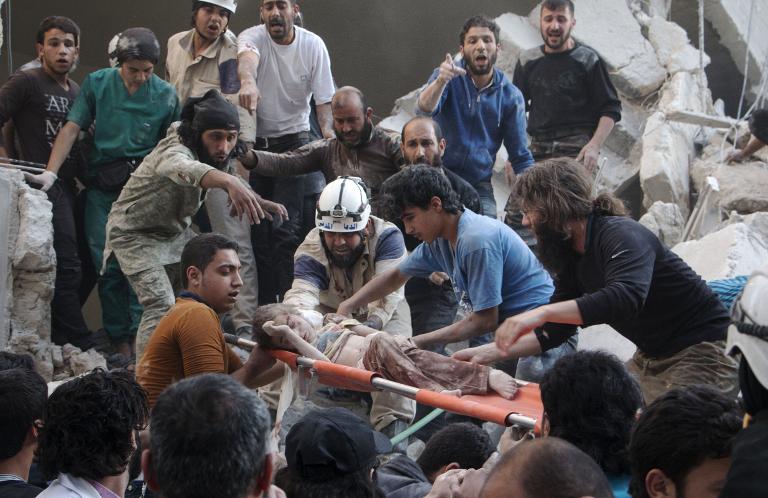 The UN envoy to Syria condemned regime bombing of civilian areas as “totally unacceptable” after more than 140 people were killed in a day of heavy air raids.

Across the border in Iraq, pro-government forces pressed their operation aimed at sealing off jihadists who captured the city of Ramadi two weeks ago.

In Syria, barrel bombs dropped by President Bashar al-Assad’s helicopters killed 84 civilians, including children, in the northern province of Aleppo on Saturday, a monitoring group said.

“The news of aerial bombing by Syrian helicopters on a civilian area of the Aleppo neighbourhood of Al-Shaar deserves the most strong international condemnation,” UN envoy Staffan de Mistura said in a statement.

“The use of barrel bombs must stop,” he said. “All evidence shows that the overwhelming majority of the civilian victims in the Syrian conflict have been caused by the use of such indiscriminate aerial weapons.”

He said it was “totally unacceptable that the Syrian airforce attacks its own territory in an indiscriminate way, killing its own citizens.”

The Syrian Observatory for Human Rights said regime air strikes throughout Syria killed at least 141 people on Saturday, including 20 in a rebel-controlled village in northwest Idlib.

It said 22 people were killed in raids on the northeastern jihadist-dominated town of Al-Shadadeh.

Its toll did not include another 43 people — including fighters from the Islamic State group and their families — killed in a government raid on the same town.

Syria’s conflict, which began in March 2011, has left more than 220,000 people dead and forced millions to flee.

Several rounds of peace talks have made no headway and the UN envoy’s efforts to broker a ceasefire in the second city of Aleppo were rejected by rebel factions.

Regime barrel bombs — crude weapons made of containers packed with explosives — have often struck schools, hospitals, and markets in Syria.

But the toll from the Saturday raids, which also targeted a market in the IS-controlled town of Al-Bab, was among the highest.

“This is further shocking proof of the horrific and indiscriminate methods the Assad regime is using to kill and injure innocent civilians, including children,” said British Foreign Secretary Philip Hammond.

The tactic of carrying out air attacks on built-up areas after battleground losses has become common practise for Syria’s regime, which ceded swathes of territory in May.

“The regime has always dropped barrel bombs in this war, but it is intensifying its strikes believing it can compensate for territorial losses,” said Observatory head Rami Abdel Rahman.

His group has documented reported 17,000 barrel bombings by the Syrian regime since October.

It also reported that 27 civilians were killed and dozens more injured when a bush fire spread to a local clinic in the northeast Hasakeh province.

– IS advances in Syria –

Following defeats in Idlib’s provincial capital and at a massive military base nearby, government forces also lost the ancient city of Palmyra to IS on May 21.

The jihadists demolished Palmyra’s notorious government prison on Saturday, razing what was for decades a symbol of abuses against regime opponents.

IS also seized a major checkpoint at a crossroads south of Palmyra on routes leading to Damascus as well as Homs to the west, the Observatory said.

“The road is now open (for IS) from Palmyra to Anbar province in Iraq, without any obstacles,” said Mohammed Hassan al-Homsi, a local activist.

IS consolidated its gains in northern Aleppo province, overrunning rebel-held villages near Turkey. The two-day clashes killed 31 rebels and 22 jihadists, according to the Observatory.

Despite recent losses, Syrian Prime Minister Wael al-Halqi on Sunday pledged the army would “liberate every foot of Syrian territory” from the jihadists.

In Iraq, government troops and allied paramilitary forces on Saturday retook an area west of Ramadi, captured by IS two weeks ago.

But Human Rights Watch accused Iraqi authorities of blocking thousands of families from escaping violence in the mainly Sunni province of Anbar.