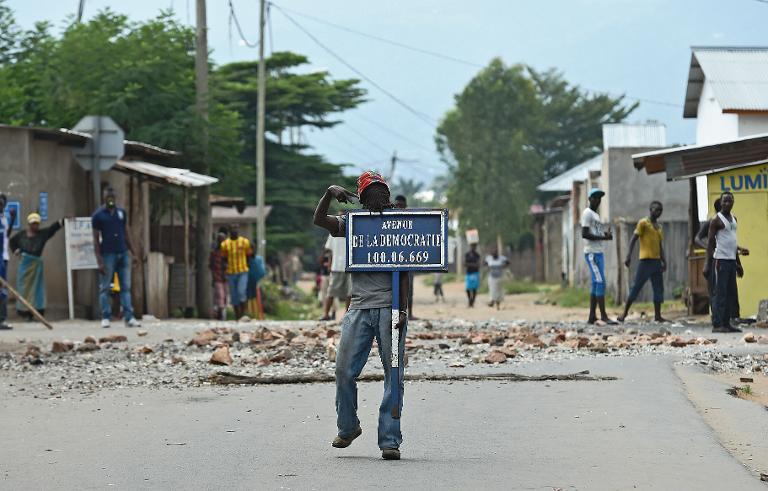 Elections in Burundi should be delayed by at least a month and a half and all violence must stop, East African leaders said Sunday after a regional summit on the crisis.

The leaders, however, stopped short of calling for Burundian President Pierre Nkurunziza to abandon his controversial bid for a third consecutive term, which has sparked weeks of civil unrest, a coup attempt and a refugee crisis.

“The summit, concerned at the impasse in Burundi, strongly calls for a long postponement of the elections not less than a month and a half,” the East African Community (EAC) said in a statement read out by its secretary general Richard Sezibera after the meeting of regional leaders in Tanzania.

The statement called “on all parties to stop violence,” for the “disarmament of all armed youth groups” — a clear reference to ruling party supporters accused of attacking opponents — and for “the creation of conditions for the return of refugees” who have fled the turmoil.

The crisis in Burundi erupted after the ruling party designated Nkurunziza, in power for 10 years, as its candidate for upcoming elections.

The opposition and rights groups say this violates the constitution as well as a 2006 peace deal that ended a 13-year civil war.

The war left hundred of thousands dead, and there are widespread fears that the current crisis could push the impoverished, landlocked country back into conflict.

Burundi’s government has insisted that parliamentary elections will take place on June 5 despite weeks of civil unrest that has left at least 30 people dead. The presidential election is scheduled for June 26.

The summit has been seen as an important opportunity to resolve the crisis, with talks between Nkurunziza’s camp and the Burundian opposition deadlocked.

However the leaders stopped short of telling the president to back down, only calling for a “return to the constitutional order” in Burundi.

The Burundian president, however, failed to turn up: his spokesman said he instead would be pushing ahead with his re-election campaign.

It was during a first crisis meeting on May 13 in Tanzania’s economic capital, attended by Nkurunziza, that a top general launched an unsuccessful bid to oust him — and the president was seen as being wary of again leaving the country.

There was no immediate response from the Burundian government to the call for an election delay.

According to a diplomat close to the talks, Nkurunziza will also be expected to “give the opposition and independent media an opportunity to freely express themselves”.

The EAC summit was attended by leaders from Kenya, Tanzania and Uganda. Rwandan President Paul Kagame, a key regional player and Burundi’s neighbour, sent a minister to represent him, although South African President Jacob Zuma did join the talks.

Nkuruniza, a former rebel leader from the Hutu majority and a born-again Christian, insists he has every right to stand again, arguing that for his first term in office he was appointed by parliament and not after a general election.

Asked to rule on Nkurunziza’s candidacy, Burundi’s constitutional court found in favour of the president, but not before one of the judges also fled the country, claiming that its members were subject to death threats.

Key international donors have withdrawn their support for the polls, as has the influential Catholic Church in Burundi, and on Saturday it emerged that a senior member of the election commission had fled the country — further plunging preparations for the polls into disarray.

The country’s main opposition leader, Agathon Rwasa, also said elections would be a “masquerade” if they go ahead.

UN special envoy Said Djinnit said on Friday that talks between the Burundian government and opposition had made progress on several issues — including the reopening of independent media and the release of detainees — but not on the key issue of a halt to protests in return for Nkurunziza’s agreement not to stand again.

He said both sides “have agreed to resume their talks after the summit in Dar es Salaam”.

But demonstrators on the streets of Bujumbura said they were disappointed by the outcome of the summit.

“It doesn’t change anything. One month is not enough. there are lots of problems — independent media has not reopened, the rights of protestors are violated. All of this needs to be resolved before elections can be held,” said Antoine, an anti-Nkurunziza activist who asked that his full name not be published.

“It shows that the heads of state don’t have the will to deal with Nkurunziza,” said another demonstrator. “The crisis will continue, even get worse.”