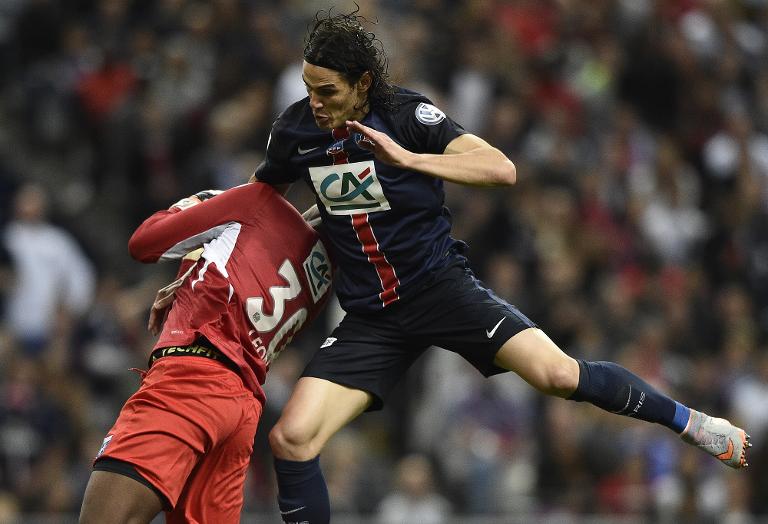 Edinson Cavani’s header after 64 minutes sealed another title for the Parisian club who had already won the Ligue 1 crown along with the Champions’ Trophy and the League Cup — the three other trophies possible in French football.

The French Cup was the only domestic title missing from PSG’s cabinet since they were taken over by their big-spending Qatari owners in 2011.

Clear favourites before the kick off, PSG only needed the second-half Cavani goal to do what no other club had ever achieved in France and bag their ninth French Cup.

“We had a great, great season. What we managed to do is unique. We play at PSG to live such moments,” midfielder Blaise Matuidi said.

“We may have some regrets from the Champions League but we lost to an ogre (Barcelona).”

“It’s also important to pay proper tribute to Auxerre who played a good game and caused us some trouble,” the French international added.

“It’s been a long season but, in the end, we achieved something special. We have amazing players and we’re very happy with what we’ve done. Now is time to celebrate.”

PSG rounded off their season in a memorable fashion with their first French Cup since 2010 but it wasn’t as easy as expected for one of the richest clubs in world football.

Ligue 2 side Auxerre, who finished ninth in their third successive season in the French second-tier, relied on counter-attacks and long balls to cause trouble to a full-strength Paris team and it took them over an hour to break the deadlock.

Captain Thiago Silva had come back from a thigh injury in time for the final as well as Zlatan Ibrahimovic, who also started despite struggling with a minor calf problem. The only absence of note was that of Javier Pastore, who was suspended.

– no record for Ibrahimovic –

Laurent Blanc’s side have shown themselves to be a step ahead of all their home rivals in 2014-2015 but Auxerre held their ground against the capital giants as they marched towards a clean sweep of domestic honours.

Even striker Ibrahimovic failed to find the back of the net, losing two duels with Donovan Leon in the Auxerre goal after 31 and 36 minutes.

The giant Swede had been dreaming of beating Pauleta’s record of 109 goals for PSG, but will have to wait until next season with his tally stuck at 106.

Thiago Motta was the main threat of the first half when his long-range effort cracked against the right hand upright five minutes from the break.

Auxerre ‘keeper Leon, just 22, needed no help when he held off a Cavani header from a Maxwell cross inside the second half.

But with 64 minutes gone, the Uruguayan forward once again rose unmarked in the heart of the defence to cannon a powerful header off the underside of the bar and into the back of the net.

Late but unconvincing attempts from Amara Baby or Cheick Fantamady Diarra for the Burgundy side never troubled Paris’ Cup specialist Nicolas Douchez, who kept his fourth clean sheet of the tournament.

Relegated in 2012, Auxerre, who saw Eric Cantona, Abou Diaby and Bacary Sagna rise through their ranks, won a league and cup double under legendary coach Guy Roux in 1996 while also lifting the Cup in 1994, 2003 and 2005.

PSG’s victory means that Bordeaux, who were sixth in the league, now qualify for the Europa League, while Ligue 1 runners-up Lyon will play in the next Champions’ Trophy.