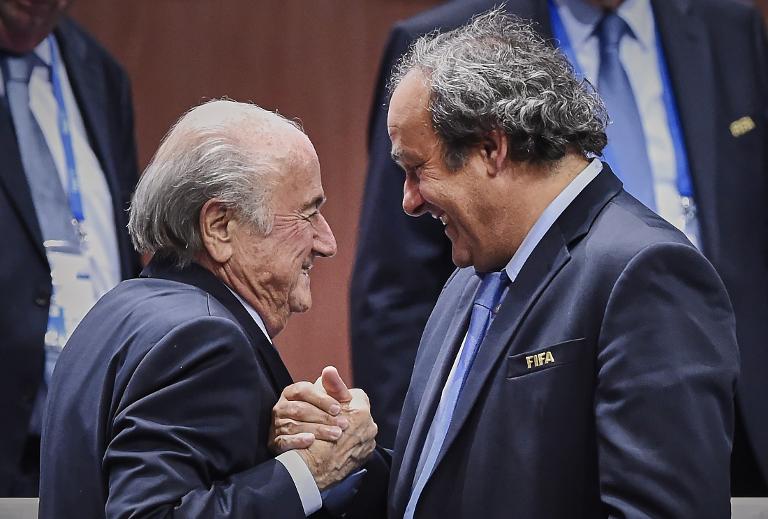 Can’t live with each other, can’t live with out each other: the tangled relationship between Sepp Blatter’s FIFA and Michel Platini’s UEFA reached a new low with the corruption storm that hit football’s world body.

But while Blatter, who controls the World Cup, and Platini, with the Champions League, may be at daggers drawn, they each know they cannot afford a costly divorce.

Platini told Blatter to resign the day after Swiss police arrested seven FIFA officials in Zurich accused by US authorities of taking tens of millions of dollars in bribes. The French football legend said he was “disgusted” at the tarnishing of FIFA’s image.

On Saturday, the day after he won his fifth term as president of the world’s most powerful sporting federation, Blatter said there was a “hate” campaign coming from UEFA and “a person” within it.

Next Saturday, on the sidelines of the Champions League final in Berlin, the UEFA executive will “review its relations” with FIFA.

Some voices, such as Denmark’s Allan Hansen, a member of the executive, say UEFA should withdraw from the world body.

England’s FIFA vice president David Gill has already refused to serve under Blatter because of the world body’s multiple scandals.

Platini says all options will be considered, but he opposes a split with FIFA, calling it the “headquarters” of football.

Blatter chided the European body for blocking his efforts to introduce an “independent ethics commission”, which he said could have stopped rotten officials getting onto the executive.

But the war stopped there and Europe kept its 13 places at the 2022 World Cup without a major fight at the executive committee. It had feared an attempt to see numbers cut.

The world football war is nothing new. But the financial stakes are growing.

“It’s part of history,” according to Jerome Champagne, a former right-hand man of Blatter at FIFA who tried to stand against his ex-boss in the election.

Ever since controversial Brazilian Joao Havelange beat England Stanley Rous to the FIFA presidency in 1974 “UEFA has permanently — in 1998, 2002 and again in 2011 — tried to take power,” said Champagne.

Europe, dominated by its cash rich major clubs in the Champions League, wants to restrain FIFA’s power, according to Champagne.

“Behind the war of personalities, it is a war of strategic visions,” he added. “Today football is becoming like basketball where there is only one league that matters, the NBA.”

The rival football enterprises are both huge earners.

FIFA made $5.7 billion between the 2010 and 2014 World Cups, much of which goes back to small federations in Africa and Asia who backed Blatter this week.

It has a grip on the rules and regulations of the world’s most popular sport. But decisions from the award of World Cups to television contracts have been surrounded by corruption claims for many years.

UEFA predicts bumper revenue of more than $5 billion for 2015-16 alone when it stages the European Championships in France. Earnings from the the Champions League are putting on healthy growth each year.

Its reputation is clean. But many of the players who shine for Barcelona, Real Madrid, Juventus and Manchester United come from beyond Europe however. And that causes frustration for countries outside.

Franz Beckenbauer, the German legend who was on the FIFA executive, says FIFA and UEFA need “urgent” talks or football everywhere will suffer.

But with the US corruption investigation growing and bitterness in Europe high, the squabble will not end soon.

“I forgive everyone, but I will not forget,” Blatter said of his ties with Platini.

Platini could be ready to let the tensions run. He is said to be thinking about a run for the FIFA presidency in four years time.