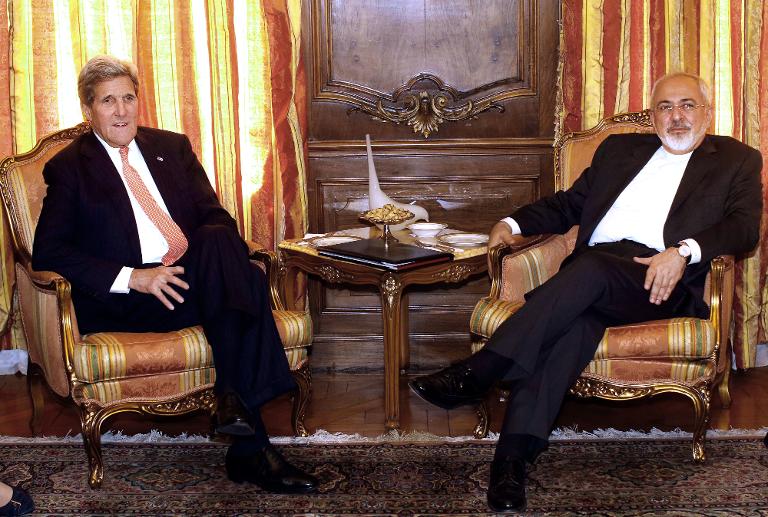 Tehran rejected a key Western demand for site inspections Saturday and differences remained after US Secretary of State John Kerry and his Iranian counterpart held talks to secure a nuclear deal.

With a deadline a month away, a senior Iranian negotiator said the Geneva talks between Kerry and Iran’s Foreign Minister Mohammad Javad Zarif failed to bridge the differences between Tehran and world powers.

“The differences are still there,” Abbas Araghchi, deputy head of Iran’s negotiating team, said at the end of the meeting.

Araghchi, quoted by state television’s website, said the negotiations would “resume next week at the level of deputies and experts”, rather than have the Kerry-Zarif talks go into a second day as expected.

The latest talks in the run-up to a June 30 deadline came amid heightened diplomatic moves to try to end a 12-year standoff and put a nuclear bomb beyond Iran’s reach.

Kerry and Zarif huddled for six hours in a leading hotel with their delegations and top European Union official Helga Schmid.

“Secretary Kerry and Foreign Minister Zarif, along with their teams, had a thorough and comprehensive discussion of all of the issues today,” a senior State Department official said.

“We are committed to working to close the remaining gaps and to staying on the schedule we’ve set forth to get this done,” the official said.

But just before the Geneva talks got underway, Araghchi said it would be “out of the question” for UN inspectors to question Iranian scientists and inspect military site inspections as part of a final deal with world powers.

After an interim accord struck in Geneva in November 2013, Washington and Tehran are trying to nail the final details of a ground-breaking agreement that would see Iran curtail its nuclear ambitions in return for a lifting of crippling international sanctions.

After three decades of enmity, an accord would pave the way to bringing Iran back into the international fold and create fresh impetus to resolve a host of conflicts in the Middle East.

The Geneva meeting came as the United States and its partners — Britain, China, France, Germany and Russia — seek to finalise the complex pact.

On April 2, Iran and the “P5+1” — as the US and its partners are known — agreed after eight days of tough talks in the Swiss city of Lausanne to the main outlines of a nuclear deal, with Tehran agreeing to rein in and mothball large sections of its nuclear programme.

But the differences remain, with both the United States and Iran under immense pressure from hardliners not to make major concessions.

Since the April 2 accord, technical experts have been meeting behind the scenes to overcome the remaining issues. But many of the decisions now need to be made at a political level.

The US official said that the accord would have “multiple annexes” perhaps as many as three or more, which are already being drafted.

And despite rumblings from both Iranian and French officials that the talks may drag on beyond June 30, US officials insisted that was not on the table.

“We’ve been very clear that we are not contemplating an extension at this point. June 30th is a real date,” the State Department official said.

Several sticking points remain, including the possible military dimensions of the Iranian programme and the demands by the P5+1 group for UN inspections of Iranian military bases.

Iran also is demanding an accelerated lifting of US, EU and UN sanctions, while the P5+1 wants a “snapback” mechanism to be put in place, enabling the measures to be quickly reimposed if Tehran breaks the deal.

“Kerry will stress to Zarif the importance of granting access for inspections,” a Western diplomat said before the meeting.

Yukiya Amano, head of the UN’s atomic watchdog, told AFP this week that Iran had agreed to implementing the Additional Protocol of the Nuclear Non-Proliferation Treaty (NPT) that allows for snap inspections.

“When we find inconsistency or when we have doubts, we can request access to the undeclared location for example, and this could include military sites,” he said.