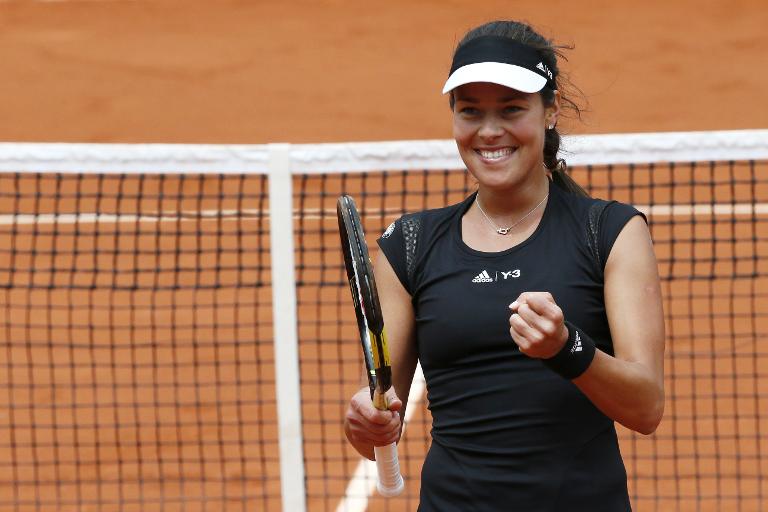 Ana Ivanovic made the French Open quarter-finals for the first time since her 2008 title run Sunday where she’ll face Elina Svitolina, the first Ukrainian to make the last eight.

But defending champion Maria Sharapova’s scheduled last-16 clash against Lucie Safarova was pushed back until Monday after rain caused a lengthy stoppage at a chilly Roland Garros.

Watched again by German World Cup winning football star Bastian Schweinsteiger, the 27-year-old Ivanovic shrugged off a two and a half hour rain stoppage to secure her third three-set win in four rounds in Paris.

“It’s amazing to be in the quarter-finals again. To be honest, coming into the tournament I didn’t really expect that at all,” said Ivanovic.

“But I really worked hard for each match. I worked hard even before the tournament to reach the quarter-final again.”

Svitolina, seeded 19, is only the second Ukrainian woman to reach a Grand Slam quarter-final after Kateryna Bondarenko made the last eight at the 2009 US Open.

It was Svitolina’s first win over Cornet in three meetings and the result ended French hopes in the women’s singles for another year.

She displayed nerves of steel to achieve victory, failing to serve out the tie in the 10th game of the second set and then allowing five match points to slip through her fingers.

However, she secured victory on her sixth match point when Cornet went long with a backhand, her 42nd unforced error of the windswept tie.

Svitolina will take a 6-0 losing record into her clash with Ivanovic, a run that includes a second round loss in Paris last year and again on clay in Madrid earlier this month.

“I hope I can serve better, of course, because I was serving not so good against her in Madrid,” said Svitolina.

With four men’s last-16 ties still to be played on Court Philippe Chatrier and Court Suzanne Lenglen, it was decided that Sharapova and Safarova will play their fourth round on Monday instead.

Sunday’s other fourth round clash between 33-year-old Italian Flavia Pennetta, who has never played in the French Open quarter-finals, and Garbine Muguruza, the Spanish 21st seed, was also shelved.

Muguruza, the 2010 junior champion, had a breakthrough Roland Garros in 2014 when she defeated Serena Williams on her way to the last-eight.

“The scheduled 4R matches between Sharapova-Safarova & Muguruza-Pennetta have been cancelled for today,” tweeted the organisers.