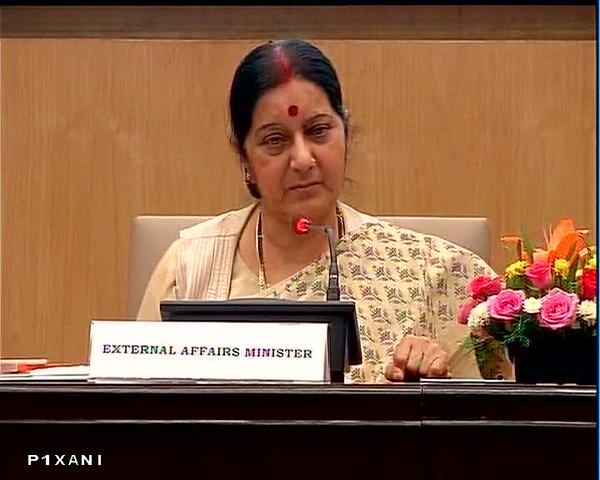 Begining with the Indo-Pak ties, the Union Minister said both the countries have supported each other during difficult times, irrespective of the bitterness in relationship.

Citing example of Peshawar terror attack, Sushma said, “PM Modi called up Nawaz Sharif assuring that India is with them (Pakistan) in the hour of need,”

Talking about the stalled dialogue process between the two countries, she made it clear that India is ready to solve all issues in a peaceful manner, adding “no third party will be involved in the dialogue between India and Pakistan.”

Third point she made while talking about the dialogue process was that the talks should take place in a non-violent zone.

Coming on the issue of Indians stranded in Iraq, which in recently had conflicting versions from a survivor and the government, the minister reiterated India’s stand that the stranded Indians are alive.

“Itâ€™s true that one person who fled from Iraq says all the captives are dead. But I have eight sources that confirm that those Indians are alive. I’m not conducting this search operation only as my duty,” Sushma said.

Touching on the issue of PM Modi’s Nepal visit, she said, “From the last 15 years no Indian prime minister had visited Nepal. No Foreign Minister had been a part of the JCM in Nepal for nearly 23 years.”

While talking about the Prime Minister’s foreign visit, Sushma said Modi will be visiting Israel this year and that the time and date of it hasn’t been finalised yet.

The External Affairs Minister also said that a proposal for MoU to teach German language as an additional language in the Kendriya Vidyalayas has been sent to Berlin.

“We have sent a proposal for MoU to Germany saying we are ready to teach German as an additional language, but in return Germany must also teach Sanskrit or any other modern Indian language. Their response is awaited,” she said.

The government had replaced Sanskrit with German as the third language in KVs last year, contending that the arrangement violated the three language formula.