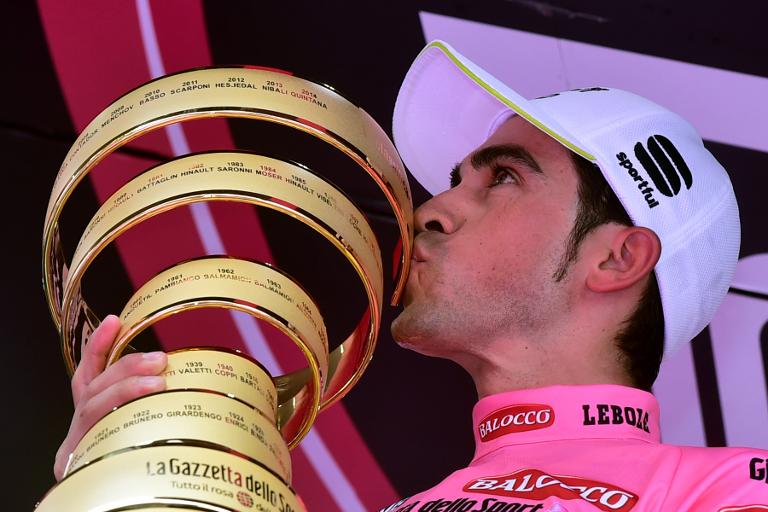 In trying to emulate his childhood “inspiration” Marco Pantani, Giro d’Italia champion Alberto Contador has underlined his ambition to cap an at times controversial career by retiring as one of cycling’s greats.

Contador secured victory on the 98th edition of the Giro on Sunday to claim his second pink jersey from the race and his seventh Grand Tour title.

Beating 2013 yellow jersey winner Chris Froome and defending Tour champion Vincenzo Nibali, neither of whom participated in the Giro, this July would further establish Contador among the sport’s stage racing greats.

But he has already admitted that becoming the first cyclist since Pantani, in 1998, to win the Giro and Tour de France double in the same year won’t be easy.

“I used more energy than I would have liked to,” admitted Contador.

Yet on paper, cycling’s most successful Grand Tour rider since the downfall of disgraced Lance Armstrong is halfway there.

Despite Pantani dying a lonely, tragic death after overdosing on cocaine and prescription drugs in a Rimini hotel room in February 2004, Contador admitted Italy’s most loved cycling son was his childhood inspiration.

“I would have liked to win this stage because of Marco Pantani, who was a big inspiration for me when I was young,” said Contador after finishing third on stage 15 from Marostica to Madonna Di Campiglio, where Pantani was infamously thrown off the race for suspected doping in 1999.

But like Pantani, Armstrong and other cycling champions before him, Contador has not been immune to the sport’s many controversies.

The ‘Operation Puerto’ doping affair forced Contador’s Astana-WÃ¼rth team to withdraw from the Tour de France before it began in 2006.

Contador bounced back to claim his first Tour de France title with a 23sec lead on Australian Cadel Evans in a 2007 race marked by the expulsion of Danish race leader Michael Rasmussen on doping suspicions.

When Astana were not invited to the 2008 Tour, Contador answered a last-minute invitation by Giro organisers, swapped his beach shorts for his cycling kit and promptly went on to win his first pink jersey.

He returned to the Tour de France a year later to completely outclass Andy Schleck, with Armstrong, who had come out of retirement, finishing third.

Contador successfully defended his title in 2010 only to announce, just over a month later, that he returned a positive test for clenbuterol.

The Spaniard blamed contaminated meat for the presence of the anabolic steroid, but after 16 months the Court of Arbitration for Sport (CAS) stripped Contador of his 2010 Tour de France and 2011 Giro titles, banning him until August 2012.

Contador still believes he is still the 2011 Giro champion. On Saturday, he held up three fingers as he stood atop the podium and said later: “Those who saw me here in 2011 know who won the race.

Ruled out of the 2012 Tour de France, won by Bradley Wiggins, because of his ban, Contador won the 2012 Tour of Spain and then turned his attention to a yellow jersey assault in 2013.

It was ended by a crash on stage 10 which forced his retirement, and although he made amends by claiming his sixth Grand Tour title, beating Froome by 70secs at the Tour of Spain, a third yellow jersey remains elusive.

Contador says he won’t have the same freshness as his rivals when he lines up in Utrecht in just 31 days time for what could be another epic three weeks of racing.

“I won’t have the same level of form as those who have been preparing for just the Tour,” said Contador.

But before his planned retirement at the end of 2016, he added: “The bigger the challenge, the more I enjoy it. I’m well aware of how difficult it will be… but I’m very optimistic.

“I’m thinking about the Tour already. Once we get there, we’ll see what happens.”