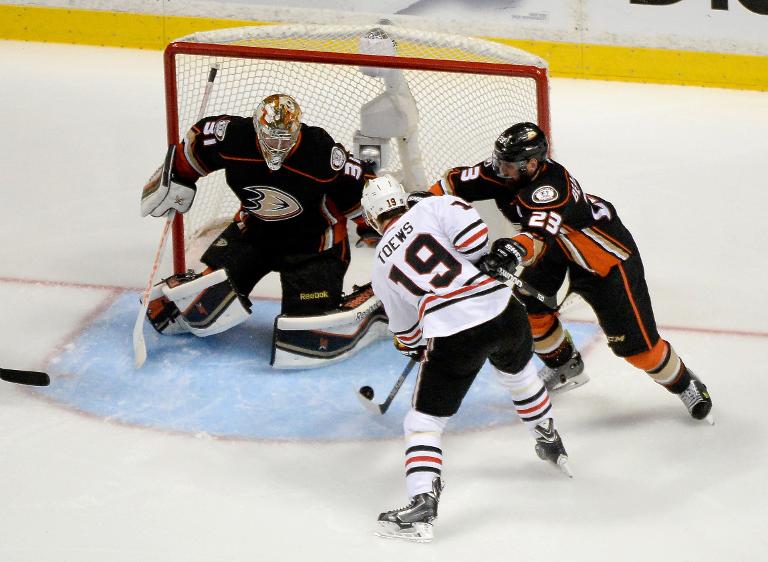 Jonathan Toews scored twice as the Chicago Blackhawks advanced to their third Stanley Cup final in five years with a 5-3 win over the Anaheim Ducks in game seven of the Western Conference finals.

“Every game was close, this was an amazing series and is the most competitive one I have ever been part of,” said Blackhawks coach Joel Quenneville. “I felt both teams left it out there.”

Chicago now faces Tampa Bay in the Stanley Cup finals beginning Wednesday in Florida. The Lightning advanced with a 2-0 win over the New York Rangers Friday in another game seven.

Chicago rallied to win the last two games of the best-of-seven series which will go down as one of most thrilling in the history of the Original Six franchise.

The epic series was filled with plenty of heroic performances, rapid fire scoring, twists of fate including several strange goals, and the longest game in Blackhawks’ history — a game two marathon that lasted well into the third overtime.

The Blackhawks had to come back and win game six at home 5-2 after losing game five 5-4 on the road in overtime.

“An amazing comeback by us,” Quenneville said. “It was a brutal loss going home. But the guys never said die.”

Ryan Kesler, Corey Perry and Matt Beleskey scored for Anaheim, who were hoping to advance to their first Stanley Cup final since winning it all in 2007.

Anaheim and Chicago had played three overtime games in this series but Saturday’s contest never got close to matching the excitement level that set the stage for a game seven.

Toews silenced the crowd of 17,300 at the Honda Center by opening the scoring just over two minutes into the first as he swatted home a rebound off a nifty point shot by defenseman Niklas Hjalmarsson.

Toews made it 2-0 just past the halfway point of the period by wristing a long shot on the powerplay past Ducks goalie Frederik Andersen after taking a pass from Brad Richards.

Toews’ two goals in the first period gave him four straight for Chicago at Anaheim as he scored twice late in game five to send that tilt into overtime.

Toews said the key to beating the Ducks was to figure out how to stop their top line of Ryan Getzlaf, Perry and Patrick Maroon.

“The last two games Joel did a great job of analyzing the situation and seeing how we could take their top players off their game,” Toews said.

“We just tried to make things difficult for them. They wanted to play offense for the most part and we did a pretty good job defensively against them.”

Hossa’s goal at 13:45 of the second made it 4-0 and went in off his right skate as he was driving to the net. But the referee ruled that he didn’t intentionally kick it in with his skate blade. After a video review the goal was allowed to stand.

The Ducks initially protested the goal but coach Bruce Boudreau said after the game they weren’t going to use that as an excuse and that video review officials tend to favor the call that is made in real time.

“I am sure if they had called it no goal on the ice they wouldn’t have overturned that either,” Boudreau said.

Boudreau said the Ducks forced the issue when they got down by a few goals instead of simply trying to chip away at the Hawks’ lead one goal at a time.

“I thought we lost our composure,” he said. “They had so many odd man rushes I had to tell my guys to stay the course. We needed goals but you just can’t have breakaway after breakaway.”

This marks the third consecutive year the Ducks’ season has ended with a game seven loss at home.

“I am sure they will move on. It is going to hurt for awhile,” Boudreau said.