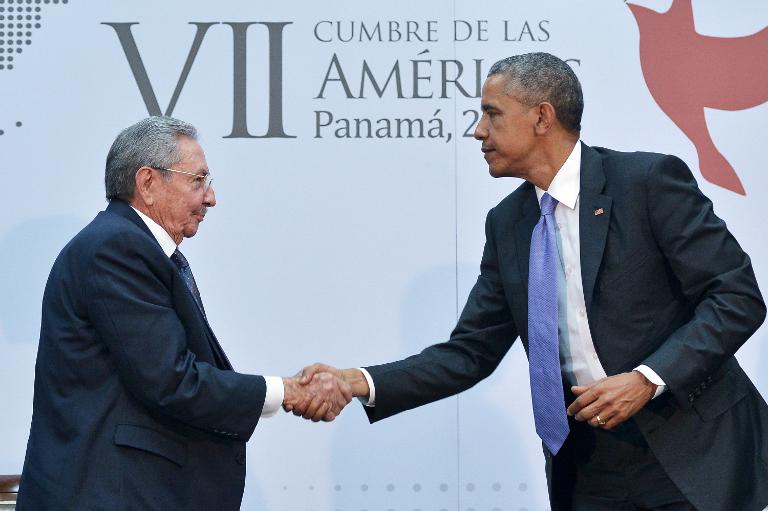 The United States dropped Cuba from its blacklist of state sponsors of terrorism on Friday, removing yet another hurdle as the two countries seek to restore diplomatic ties frozen for five decades.

Cuba has vehemently protested its 1982 inclusion on the blacklist — which hampered its access to global markets and tarred it as an international pariah — and had demanded that the decision be rescinded.

Secretary of State John Kerry confirmed that effective Friday a “final decision” had been taken to remove Cuba from the list, after President Barack Obama in April gave Congress 45 days to object.

Only Iran, Sudan and Syria still remain on the terror blacklist.

The move has deep political significance as the Cold War foes grapple for a rapprochement, but it may also afford Cuba better access to US banking facilities and American aid, and lift some restrictions on exports and arms sales.

However, a tight economic embargo slapped on the communist-run Caribbean island in 1962 remains in place, meaning there may be little immediate effect from Friday’s historic decision.

“The lifting of the state sponsor of terrorism designation does not lift the embargo, just to put that kind of bluntly,” State Department press office director Jeff Rathke told reporters.

He also highlighted that there still remained “a web of restrictions and sanctions that have been applied over the years, and some of them are unrelated to the state sponsor of terrorism designation.”

Obama and Cuban President Raul Castro agreed in December to restore relations, and the two leaders held ground-breaking talks on the sidelines of an April summit in Panama.

Delegations from the two nations have met four times since January seeking to carve out a path towards re-opening embassies, a first step towards normalizing diplomatic relations snapped in 1961.

But US officials admitted Friday there was still no timetable for that to happen, amid Cuban objections to US democracy programs and demands that American diplomats be allowed to meet freely with dissidents.

“We still have significant disagreements with Cuba and we have concerns about a number of Cuba’s policies and actions. Those concerns remain, but they fall outside the criteria for designation as a state sponsor of terror,” Rathke said.

“We still have some gaps that we have to close” with no new date set for further talks, he said.

The White House sees better relations with Cuba as correcting an out of date policy and as a likely signature foreign policy achievement of Obama’s presidency.

But Republican leader John Boehner slammed the administration for handing “the Castro regime a significant political win in return for nothing.”

“Relations with the Castro regime should not be revisited, let alone normalized, until the Cuban people enjoy freedom â€“- and not one second sooner.”

While ties are warming, generations of mistrust and legislation remain.

Obama has already made it easier for 12 categories of Americans to visit the communist island, no longer requiring them to apply for a license before travelling.

Those allowed to visit Cuba can bring back home $100 worth of cigars or rum, and pay for purchases on the islands with credit cards.

US companies are now allowed to invest in Cuba’s tiny but growing private sector, which emerged under modest economic reforms launched by Castro.

In March, the two countries re-established a direct telephone link and the US Treasury Department removed sanctions on some 60 individuals, shipping companies and trading firms.

“US banks may gain more comfort now that Cuba has been removed from the list and begin handling those transactions” using debit and credit cards, said international business expert Lawrence Ward.

While a host of other prohibitions remain in place, the move “may pave the way for more monumental changes in those sanctions and restrictions,” he said.