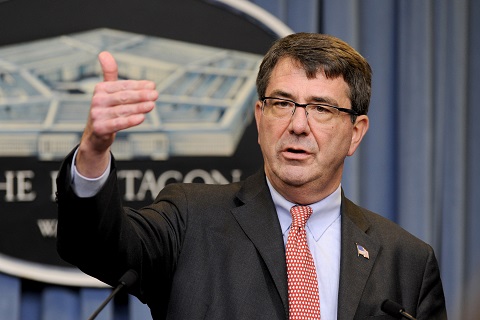 Ahead of his India visit next week, US Defence Secretary Ashton CarterÂ on SaturdayÂ said America is looking for new ways to complement India’sÂ ‘Act East’ policy and find meaningful areas of cooperation in the AsiaÂ Pacific.

“The United States is looking for new ways to complement India’s ActÂ East policy and find meaningful areas of cooperation in the AsiaÂ Pacific,” he said.

“The 2015 US-India Defense Framework I will sign next week will openÂ up this relationship on everything from maritime security to aircraftÂ carrier and jet engine technology cooperation,” he told delegates atÂ the Shangri-La Dialogue plenary session in Singapore.

During his visit next week, Carter said he will tour the Eastern NavalÂ Command at Vizag and meet with with his Indian counterpart ManoharÂ Parrikar in New Delhi to sign the new US-India Defense Framework thatÂ will guide military cooperation for the next decade.

“We’re leveraging America’s alliances and partnerships to pursue newÂ forms of cooperation and that is why America’s trilateral networks areÂ blossoming,” Carter said.

He pointed out that with Japan and Australia, the US is strengtheningÂ maritime security in Southeast Asia, expanding trilateral exercisesÂ and exploring defence technology cooperation.

With Japan and Korea, the United States is building on a first-of-itsÂ kind information-sharing arrangement that will help collectively deterÂ and respond to crises, he said.

“And with Japan and India, the United States is sharing lessonsÂ learned on disaster responses and building greater maritime securityÂ cooperation,” said Carter.

Prior to India, Carter will leave for Vietnam after his SingaporeÂ visit to attend the Shangri-La Dialogue. The exact dates of his travelÂ were not given.

He will be visiting Haiphong and then Hanoi, where he and VietnameseÂ Defense Minister General Thanh will sign a Joint Vision Statement thatÂ for the first time commits both the United States and Vietnam toÂ greater operational cooperation.

“Each of these stops, just like my visits to Japan and the Republic ofÂ Korea last month, is a reminder of the regional demand for persistentÂ American engagement and the importance of the regional securityÂ architecture that has helped so many Asia-Pacific nations rise andÂ prosper,” he said.

Referring to issues related to the South China Sea, Carter said theÂ United States wants a shared regional architecture that is strongÂ enough, capable enough, and connected enough to ensure that allÂ Asia-Pacific people and nations have the opportunity to rise andÂ continue to rise in the future.

“The United States wants a future in which an Indonesian fisherman, anÂ energy executive from Malaysia, an entrepreneur from Singapore, aÂ small business owner in California, and a Chinese businesswoman – justÂ to name a few – have the security and opportunity to rise and prosper.Â And the United States wants to protect the rights of all countries,Â whether large or small, to win…To rise, prosper and determine theirÂ own destiny,” he said.

America’s alliances and partnerships have been the bedrock of peaceÂ and stability in the Asia-Pacific for decades, he pointed out.

And the United States is working with allies like Australia, Japan,Â the Republic of Korea, Thailand, and the Philippines to be sure theyÂ continue to serve that function, the US Defence Secretary said.

“Modernisation means changing these alliances to address the evolvingÂ threat of environment as the United States has done with South KoreaÂ and growing these alliances into platforms for regional and globalÂ cooperation, as we’ve done with Australia and Japan,” Carter said.

He said the United States and China have agreed to two historicÂ confidence-building agreements this past fall, and Washington hopes toÂ do more.

“Beyond exercises and military-to-military cooperation, we also buildÂ habits of cooperation when we work together to confront real worldÂ challenges, such as responding to natural disasters and otherÂ humanitarian crises. These efforts are critically important in aÂ disaster-prone region,” Carter said.