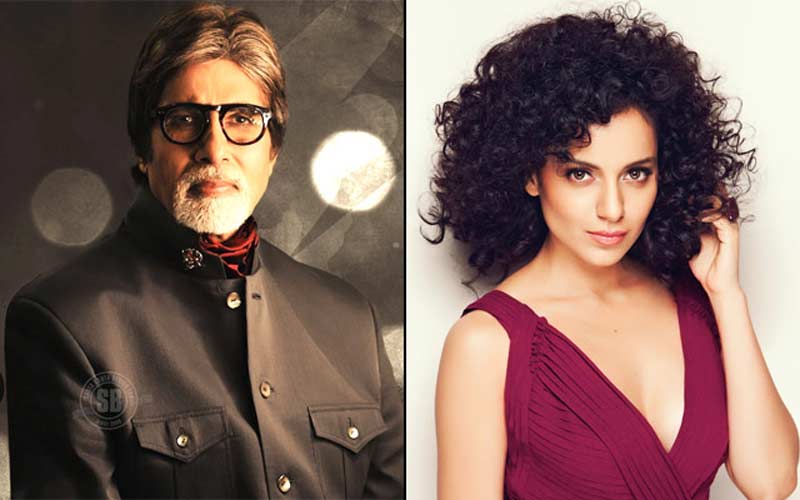 Mumbai: Amongst the millions of fans who are going gaga over her performance in Tanu Weds Manu Returns, one of them is none other than the legend of Indian cinema, Amitabh Bachchan.

Every actor waits for the day when Big B will send him his patented letter and bouquet of flowers, a proof that he has loved their performance.

This time however, Big B sent not just one, but two letters and two bouquets for Kangana, one for Tanu and the other for Datto.

Kangana said, “Mr Bachchan sent me a letter for Queen too, but that was written in English and that too, the level of English that he himself speaks, which is high end. This time, he has written a poem and that too in Hindi, so I could read it out as is to my parents as they understand only Hindi. I felt like his two letters were my two medals. I am going to frame these and keep them for life as my memory. â€œ

He wrote, ‘It happens very rarely that our eyes fill up watching a performance. You made me cry’. He said for Datto, ‘For the girl who is Tanu’s lookalike called Datto, I don’t know her but please extend my warm wishes to her.’ What broke me down reading his letters was when he wrote, ‘Main apne aap ko bhagyashali samajhta hoon, ki main uss udyog se juda hoon, jisme Kangana basti hai’ (I feel fortunate to be a part of an industry in which Kangana is a part). â€œ

Kangana had started her career in 2006 with a critically acclaimed performance in the thriller `Gangster`, for which she was awarded the Filmfare award for Best Female Debut.

In 2008 she earned two more awards in the best supporting actress category for the movie `Fashion`.

She has subsequently featured in a lot of commercially successful films like `Tanu Weds Manu` and `Once Upon a Time In Mumbai `. Recently, she was lauded for her performance in the superhero film `Krissh 3`.

Then she was applauded for Queen and she recently won one National Award for this film.

Directed by Anand L. Rai, â€œTanu Weds Manu Returnsâ€ is a sequel to the filmmakerâ€™s 2011 hit film â€œTanu Weds Manuâ€. It focusses on the rediscovery of love between a married couple, and features Kangana in a double role and has a supporting cast of actors Jimmy Shergill, Deepak Dobriyal and Swara Bhaskar.

The film got massive response not only from the critics and audience, but also from the film fraternity.