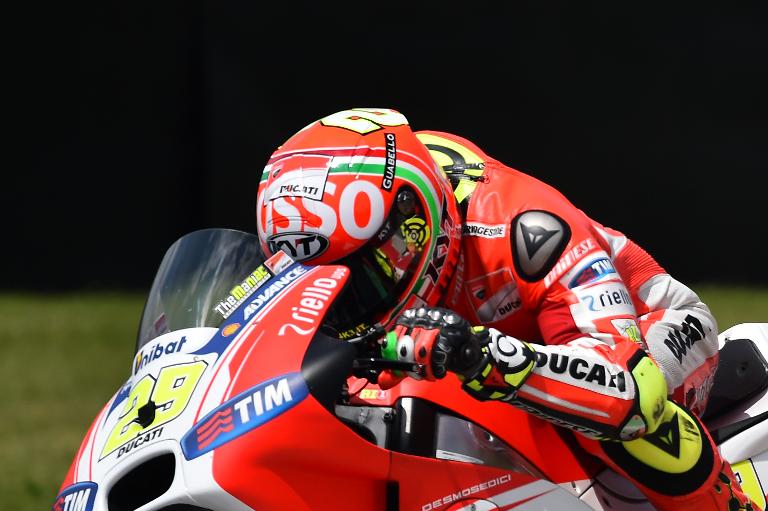 Italian rider Andrea Iannone will start from pole position for the first time in his MotoGP career when he lines up for the Italian Grand Prix on Sunday.

The 25-year-old Ducati rider — who rode with a dislocated shoulder in the previous race in France a fortnight ago — posted the fastest time in qualifying at Mugello on Saturday to record his ninth career pole spot in all categories.

“We must be proud of our performance, because we improved the bike, which has been our goal for today (Saturday),” said Lorenzo.

“We had to improve our pace by half a second and maybe we didn’t do that but we did shave off three-tenths.

“Today has been a great day. We couldn’t get the pole position, but second place is great. The setting of our bike is quite good. We may be losing a little bit in speed on the straight, but on the rest of the track we are ok.” he added.

Another Italian, legend Valentino Rossi leads the overall standings after five races — he will start in eighth spot.

“Just like previous races this season, here in Mugello the level, the speed and the lap times are a lot faster than last year,” explained Rossi.

“Marquez rode the lap time of the pole position last time and he’s just in thirteenth place, so it’s a big step forward.

“I improved a lot and my lap time was not so bad, but it wasnâ€˜t enough. It looks like the extra soft tyre worked very well, so our competitors who could use this option where very strong.

“All the top riders were able to improve their pace a lot, so apart from my starting position on the third row, which is not fantastic, I’m quite happy about today. We worked well on the bike and I improved my feeling and my pace. It will be a hard race, but we will see tomorrow (Sunday).

Lorenzo — who has eaten into team-mate Rossi’s lead in the championship with his victories in Spain and then France — had set the track alight in the morning practice session.

The 28-year-old Spaniard broke the track record for one lap with a scorching effort of 1min 46.617sec, bettering the previous mark set in 2013 by Honda’s Dani Pedrosa by more than half a second.

Honda had a poor day with two-time defending champion Marc Marquez facing a real challenge to get his season going, after a series of listless performances, as for only the second time in his MotoGP career he failed to make the top 10 riders final session and will start the race only in 13th position.

The other two races will see British riders start from pole with Sam Lowes, riding a Speed Up, at the head of affairs in Moto2 — his second ever pole position — and compatriot and championship leader Danny Kent on a Honda in Moto3.