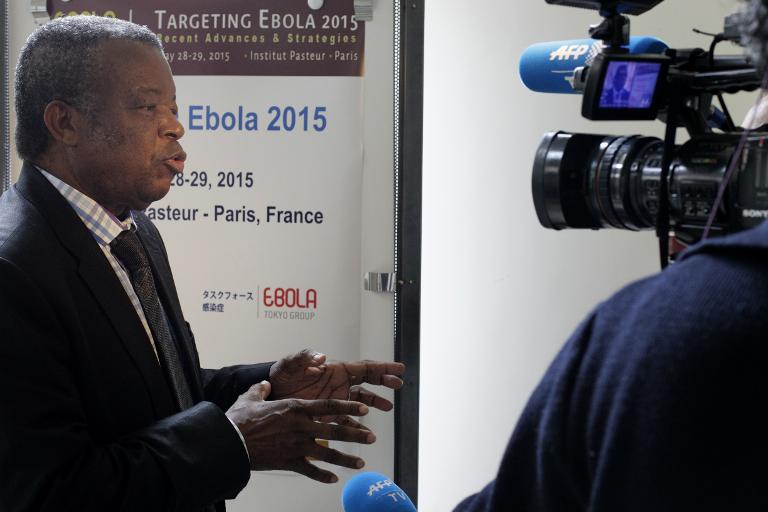 Congolese expert Jean-Jacques Muyembe may be little known to the public, but he has been one of the world’s top Ebola investigators since the first epidemic erupted in central Africa in 1976.

Now, amid a decline in a west African outbreak that has taken more than 11,000 lives, Muyembe warns that Ebola will strike again in the future and that the deadly virus poses “a threat to the whole world”.

Muyembe studied medicine in Kinshasa and at the University of Leuven in Belgium. He returned home to the Democratic Republic of Congo — then known as Zaire — in 1976, when the northern village of Yambuku was struck by a mysterious disease.

“They said many people were dying, and the health ministry asked me to go investigate,” Muyembe told AFP.

He initially thought it could be a case of typhoid fever but he decided to continue investigating until he got to the bottom of it.

“I drew blood, and had no protective gloves or clothing,” Muyembe said.

Accompanied by a Belgian nun suffering from fever, he returned from Yambuku to Kinshasa.

It was her blood samples, shipped in a makeshift cooler to the Institute of Tropical Medicine in Antwerp, that enabled scientist Peter Piot to identify the worm-looking virus for the first time.

It was then named after the Ebola river, located near the area first hit by the epidemic.

“Then there was total silence until 1995,” Muyembe said.

That year, he was summoned to Tikwit in the south of DR Congo where a bloody diarrhoea outbreak was decimating the population, including medical staff.

“I examined an Italian nun and saw signs that reminded me of the Yambuku incident,” Muyembe said.

He discovered that contamination “had taken place in the operation room — in other words, from the patient’s blood”.

Muyembe’s discovery that the virus is transmitted through bodily fluids was a key find.

“From then on, we put in place strategies to fight against the disease, isolating patients, following up on people they had been in contact with, and mobilising communities,” he said.

“These are strategies that the World Health Organization practises today.”

“We drew blood from people recovering from Ebola, and injected it into eight sick patients. Seven of them survived, even though there was an 80 percent mortality rate,” he said.

This type of treatment is now being studied for its potential.

Even after decades fighting the deadly virus, Muyembe said he was “surprised” by the sheer size of the resurgence in Guinea in late 2013.

“We thought Ebola epidemics could be brought under control quickly,” he said.

“These countries (in west Africa) believed that Ebola was a central and eastern African problem. They weren’t prepared,” he added.

The epidemic has now ended in Liberia, and is declining in Sierra Leone.

But in Guinea, “new cases continue to appear”, Muyembe said.

“We need to find the most recent cases, even if they are hidden deep in the forest, because if the disease becomes endemic, it would be terrible for the whole world,” he warned.

“Ebola can strike anywhere, and we need to be vigilant. The United States and Europe must understand that Africa is their shield.”

This year’s winner of the prestigious Christophe Merieux award for researchers studying infectious diseases in developing countries, Muyembe sees the 500,000 euros ($550,000) in prize money as a “boost” to help him study Ebola reservoir hosts.

Muyembe also sees the prize as a way to encourage young Africans studying abroad to return to work.

“I have made my career in DR Congo, despite all the conflicts my country has known,” the researcher said.

“We must build up labs and research centres in Africa,” he added, “so that when the danger arrives, we can stop it in time. This is the lesson we must learn from this epidemic.”