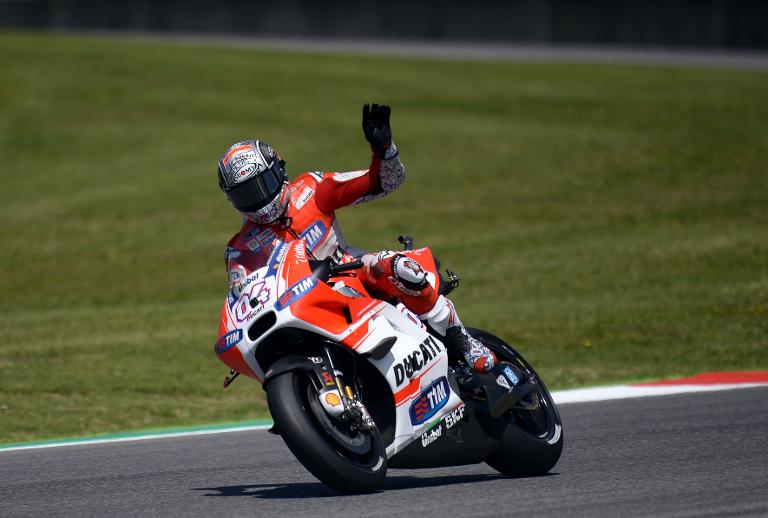 Italian Andrea Dovizioso was fastest in practice for Sunday’s Italian MotoGP on Friday as Ducati dominated the session on the Mugello track, less than 100km from their headquarters.

Defending champion Marc Marquez was second fastest on his Honda with Yamaha rider Jorge Lorenzo, winner of the last two races, third on a Yamaha.

“We are not going to look at reducing the power and this circuit is one of the most beautiful in the world. It’s going to be very difficult to adapt the bikes to the fast sections,” said Dovizioso, who almost lost control at the first turn of one of his early laps.

Lorenzo, who won the last two races in Spain and France said he hopes his team can get more speed out of the Yamaha heading into the weekend.

“I’m not completely satisfied with the way the bike is working,” bemoaned Lorenzo.

“Concerning the setting of my YZR-M1, I think we have a big margin for improvement. Little by little we are going to make progress in most of the corners, but to begin the weekend with second and third place and a good pace is a nice start.

“Let’s see if we can improve the bike and lose half a second in terms of pace tomorrow, because I think it can be much better,” added the Spaniard.

Another Italian Andrea Iannone on a Ducati was fourth fastest while championship leader Valentino Rossi on the second Yamaha clocked ninth quickest on the day.

“We started the afternoon practice well. I didn’t feel so bad with the bike and I had quite a good pace. I was quite happy, but I had some problems with braking,” said Rossi.

“We tried to modify the setting so I could brake harder, but we didn’t find a good solution and at the end I came back out on my normal bike and decided to try the harder tyre on the front and rear.

“It’s good for us to try these things to gain data and tomorrow (Saturday) we will try to modify and to improve the bike, especially under braking in the last section.

“It looks like Jorge had the best pace, but Dovi is also fast and so is Marquez. It’s only Friday, so itâ€˜s too early to say who will be the hardest to beat, but they seem to be in good shape.

In Moto2, defending champion Esteve Rabat of Spain was fastest by a 1000th of a second ahead of Frenchman Johann Zarco with both men riding Kalex machines.