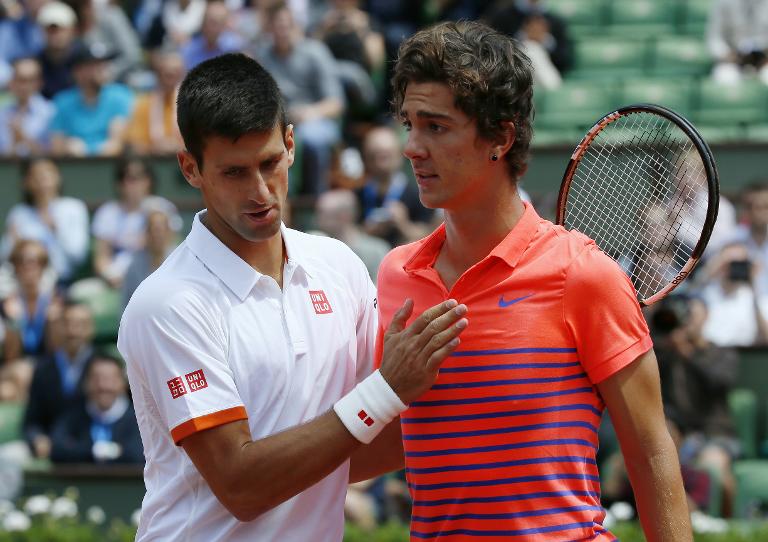 Novak Djokovic and Rafael Nadal moved to within one win of a French Open quarter-final blockbuster Saturday as the sport’s next generation endured a Grand Slam reality check.

World number one and top seed Djokovic reached the last-16 for the sixth straight year with a 6-4, 6-4, 6-4 win over 19-year-old Australian Thanasi Kokkinakis.

Third-seeded Andy Murray, twice a semi-finalist, was also untroubled as he cruised to a 6-4, 6-2, 6-3 victory over Kokkinakis’s 20-year-old compatriot Nick Kyrgios.

It was a chastening day for the sport’s youngsters at Roland Garros with Kokkinakis and Kyrgios joined at the exit door by 18-year-old Croatian Borna Coric, defeated by Amercia’s Jack Sock, 6-2, 6-1, 6-4.

“Thanasi has a lot of talent and strength. He is still a teenager and he has plenty of time to do great things,” said Djokovic after winning his 25th successive match this season.

“I hope he does as he has a lot of qualities.”

Nine-time champion Nadal reached the fourth round courtesy of eight breaks of the Kuznetsov serve.

Nadal will tackle unseeded Sock who, at 22, became the youngest American man to make the last-16 since Pete Sampras in 1993.

“I am playing more solid and am more consistent with each match,” said sixth-seeded Nadal, who took his Paris record to 69 wins against just one loss.

Kyrgios, the 29th seed and bidding to add a first French Open last-16 place to his runs to the 2014 Wimbledon and 2015 Australian Open quarter-finals, wasn’t helped by requiring a medical timeout for an elbow injury late in the second set against Murray.

Chardy lost to Murray at the Rome Masters before the Scot scratched from the event.

“I was a little bit pissed when I see he retired because of tiredness,” said Chardy.

“If he wins Roland Garros, everybody will say it was a good choice. If he loses, it will be wrong.”

It was 28-year-old Murray’s third successive win over Kyrgios, all without dropping a set, as he took his record on clay this year to 13-0.

“I used variety and slice, tried to mix it up to break his rhythm and it seemed to work,” said Murray who said he knew Kyrgios wasn’t serving at his full power as the match progressed.

“At the beginning he was serving big, over 200 kilometres an hour, and then started slowing down to 170, 180, and not really going for aces.”

After a tight first set, Murray carved out a double break in the second to put himself firmly in the driving seat.

Despite his bandaged right forearm, Kyrgios broke for a 2-1 lead in the third before surrendering the advantage in the next game.

His frustration caused him to launch a ball out of Court Suzanne Lenglen which led to a warning for a code violation.

“Andy is one of the best defenders at the moment,” said Kyrgios, who knocked Nadal out of Wimbledon last year and beat Roger Federer in Madrid this month.

Marin Cilic, the ninth-seeded US Open champion, continued his quiet progress to reach the fourth round for the third time.