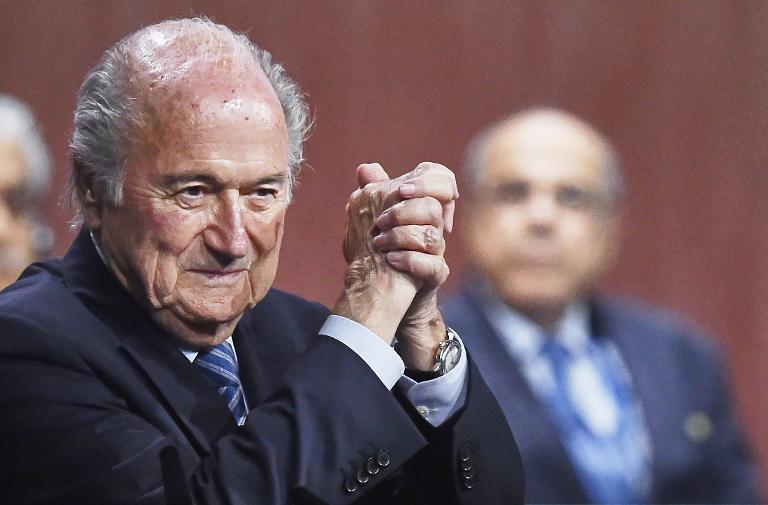 Sepp Blatter won a fifth term as FIFA president in a dramatic end to an angry campaign dominated by a corruption storm that engulfed the leadership of world football.

His challenger Prince Ali bin al Hussein withdrew from the race after preventing Blatter from getting the required majority in the first round of voting.

Blatter, who had defied calls to resign, raised his arms in triumph and promised the congress to be the “commander” who “guides this boat FIFA” out of the corruption turmoil it has sunk into.

“I’m not perfect. Nobody is perfect. But we will do a good job together,” he said.

The 79-year-old Blatter also indicated he would not stand again, saying he would hand over a “strong” FIFA to “my successor” in four years.

The end of the campaign was overshadowed by the arrest in Zurich on Wednesday of seven FIFA officials, including two vice presidents, accused by US authorities of taking tens of millions of dollars in bribes.

A top US federal investigator said he was “fairly confident” there would be another round of indictments in the case, the New York Times reported Friday.

“We strongly believe there are other people and entities involved in criminal acts,” said Richard Weber, leader of the US Internal Revenue Service criminal investigations unit. He would not identify the remaining targets or say if they included Blatter.

Swiss police are also investigating the award of the 2018 and 2022 World Cups to Russia and Qatar which have also been surrounded by corruption allegations.

Blatter fell seven votes short of the two thirds majority to win in the first round. He got 133 votes to Prince Ali’s 73.

The brother of Jordan’s king got further than any challenger to Blatter, highlighting divisions within the scandal-tainted body he will struggle to overcome.

The prince thanked those “brave enough” to vote for him before announcing he was pulling out.

In a final plea for votes, Blatter vowed to lead FIFA out of the corruption controversy if reelected.

“I promise a strong FIFA, I want to climb back up the hill, arrange FIFA’s situation. I want a beautiful, robust FIFA, out of the storm,” he said.

“We have heard questions raised about whether our family is morally bankrupt,” the prince said in his final campaign address.

Most of Europe’s 53 votes went to Prince Ali, along with the United States and Australia. But Blatter’s rockbed support in Africa and Asia saw him through.

Blatter questioned the timing of the Zurich arrests, declaring: “People say it was a coincidence. But I have a small question mark.”

Blatter said the arrests had unleashed a “storm”. But he repeated his case that he cannot “monitor” football affairs alone and calling for greater action by regional confederations and national associations.

Blatter scored one victory when the Palestinian Football Association withdrew a motion to expel Israel from FIFA because of restrictions on Palestinian teams.

But his victory was met with new hostility from the football leaders who have opposed him in the past six months.

On Thursday, he rejected an appeal by UEFA’s president Michel Platini to resign because of the scandals that the European football leader said has critically tarnished FIFA’s image.

Platini was among those to express disappointment at the result and praise Prince Ali’s campaign.

“I am proud that UEFA has defended and supported a movement for change at FIFA. Change which in my opinion is crucial if this organisation is to regain its credibility,” he said.

Platini said UEFA could discuss measures against FIFA on June 6.

“This vote has only served to endorse the election of a man who can’t remain in charge of world football,” said Luis Figo, the former Portuguese star who was a candidate in the race until last week.

“There’s no way someone can lead FIFA ignoring the most elementary rules of transparency, legality and democracy,” Figo added.

Football Federation Australia chairman Frank Lowy said he was “disappointed” but hoped Blatter would work to restore the body’s reputation.

“We will continue to push for meaningful change within FIFA,” commented US Soccer president Sunil Gulati.

German Foreign Minister Frank-Walter Steinmeier warned that if world football cannot clear up “poisonous” corruption, government agencies would be forced to step in.

Credit card giant Visa has threatened to “reassess” its sponsorship if FIFA does not clean up its act.

South Korea’s Hyundai Motor, a major sponsor of FIFA, has also said it was “extremely concerned” at the new scandals.

United Nations says it is reviewing its cooperation accords with FIFA.