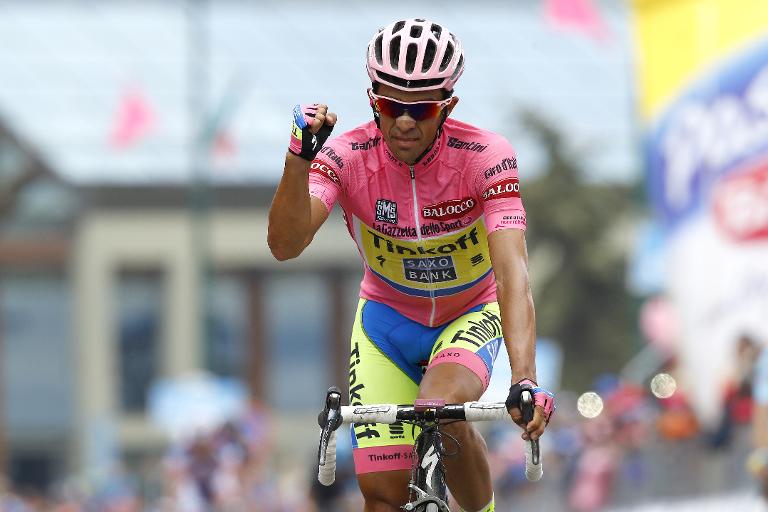 Alberto Contador was virtually assured of winning the Giro d’Italia for a second time after surviving attacks on Saturday’s summit finish to keep an unassailable lead on his nearest rival and stage winner Fabio Aru.

It was a second straight stage win for 24-year-old Italian Aru, who along with teammate and third placed overall Mikel Landa launched a desperate bid to dislodge Contador on the penultimate dirt-road climb.

But now Sunday’s flat 185km ride into Milan means that barring catastrophe Spaniard Contador will roll over the finish line over two minutes ahead of Aru, adding to a first title he won there in 2008.

Current holder of the Tour of Spain title, Contador is aiming to become the first rider since the now deceased Italian Marco Pantani to achieve the Giro d’Italia-Tour de France double in the same calendar year.

“We’ll have a good dinner tonight, although I have to watch my weight for the Tour,” a light-hearted Contador said after the stage.

“This Giro d’Italia is in the bag now, with just tomorrow’s stage to come, so I’m already thinking of my next target,” he added.

The 199km penultimate stage slog from Saint Vincent to Sestriere, featured an 8km brutal climb up the dirt roads of the Colle delle Finestre, where Astana pair Landa and Aru launched their thrilling attacks.

But Contador kept his cool to allow the pair and others to climb away from him, eventually levelling out to cross the mist shrouded summit where banks of snow still clung to the rocky slopes only a minute behind then race leader Landa.

“There was never a moment when I thought the jersey was in danger. I maintained my calm because I knew that the difference in speeds between the groups was going to be small, said Contador.

“Today was not a great stage for me. I wasn’t feeling good, probably because of the accumulated effort, but I knew I had a good cushion in the General Classification and, even though there were plenty of kilometres to go before the finish, I preferred to ride at my rhythm,” explained the Spaniard.

Before the final climb Aru caught up with Landa before launching a series of attacks with 2km to go and crossed the finish line 18sec ahead of Canada’s Ryder Hesjedal.

“This is my second stage win in two days and it still hasn’t sunk in, especially after so many days of suffering. I come to Sestriere to train, and I’m very attached to the town, so this win is special for that reason, too,” Aru said afterwards.

But by this time all eyes were counting down the clock with Contador continually punching the air as he closed in on the finish line at Sestrieres knowing the title was his.

Astana’s young leader Aru is second in the overall at 2min 02sec, with his teammate Landa third at 3min 14sec and the trio should still be in that order when the tour ends Sunday evening.

Sardinian Aru had seen his bid for overall victory steadily tamed by the superiority of Contador after the race moved upwards into the high mountains earlier this week.