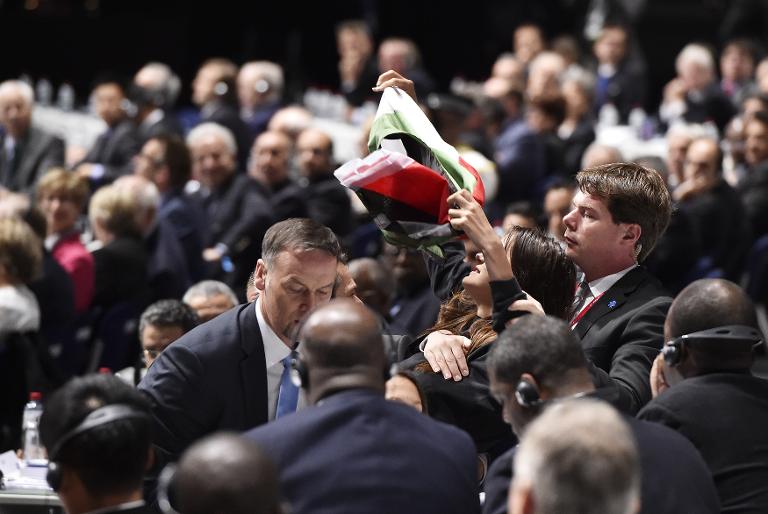 Pro-Palestinian protesters briefly interrupted the FIFA congress on Friday with world football’s governing body set to vote later on whether to expel Israel from the organisation.

The two female protesters halted president Sepp Blatter’s opening address, waving red cards at FIFA representatives and chanting ‘Israel out!” before being escorted out of the hall by security guards.

A group of around 150 pro-Palestinian protestors had gathered to chant outside Zurich’s Hallenstadion before the congress started.

Blatter apologised for the brief delay of just a few minutes and called for security guards in the building to be more vigilant.

Palestine, which has been a FIFA member since 1998, wants the governing body to expel Israel over its restrictions on the movement of Palestinian players.

It also opposes the participation in the Israeli championships of five clubs located in Jewish settlements in the occupied West Bank.

The scheduled vote needs a two-thirds majority of the 209 members to succeed and even Israeli Prime Minister Benjamin Netanyahu has got involved.

The Palestinian initative “is very serious and we will oppose them with all possible force”, he told Israeli reporters Thursday afternoon having recently met with the FIFA president.

“I told Blatter that allowing the suspension of Israel, it would allow the destruction of FIFA,” Netanyahu told the Israeli press.

Leaders of FIFA have been working hard behind the scenes to head off the vote and last week Blatter even went to both Israel and the Palestinian territories to try and find a solution.

Briefly before the protestors made their move, Blatter had called for “discipline and fair play” from the FIFA represetentatives as they seek to resolve the issue.