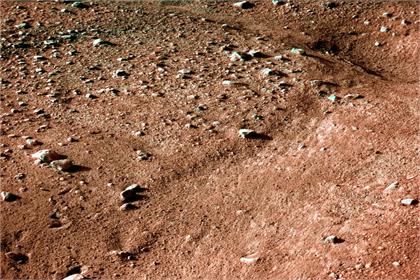 Washington: For the first time the occurrence of aurorae, a natural light display in the sky, has been predicted on Mars by the researchers.

In a recent study the researchers have shown that the upper atmosphere of Mars glows blue depending on the activity of the Sun. The result of the study was achieved through numerical simulation and a laboratory experiment called the Planeterrella, which is used to simulate the aurora and is developed by the Grenoble Institute of Planetology and Astrophysics (IPAG, France) and NASA.

Researcher Cyril Simon Wedlund claims that the study indicates that the strongest colour in the Martian aurorae is deep blue and an astronaut looking up while walking on the red Martian soil can see the phenomena with naked eye.

Aurorae occur when electrically charged particles of solar origin are driven down along the local magnetic field lines where they enter the planetary atmosphere and excite its atoms and molecules.

The recent study shows that aurorae also occur in the visible range onÂ Mars. OnÂ EarthÂ they are essentially green or red from atomic oxygen, but they even blue-purple from ionized molecular nitrogen.