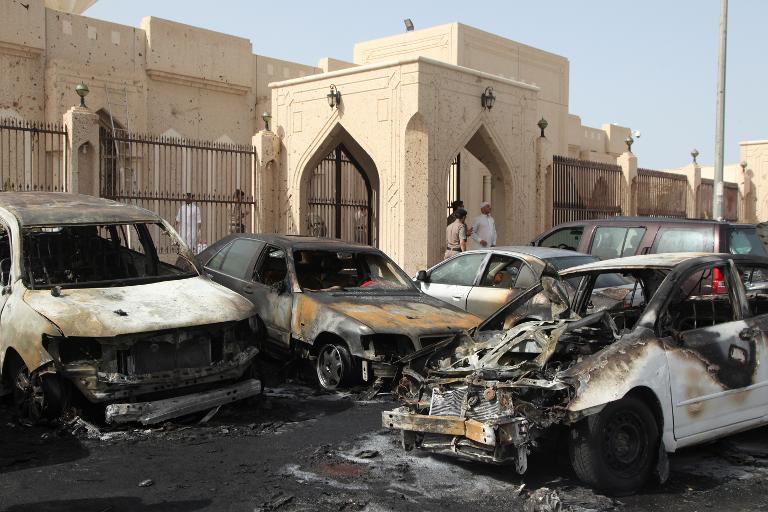 An Islamic State jihadist killed three people Friday when he blew himself up in a car outside a Shiite mosque in Saudi Arabia, the second such attack in a week.

The bombing, again coinciding with weekly Friday prayers, took place in the oil-rich Eastern Province where most of the predominantly Sunni kingdom’s Shiites live.

The suicide bomber — disguised in women’s clothing — detonated his device at the entrance to the mosque, said the official Saudi Press Agency, citing a ministry spokesman.

“Authorities have managed to foil a terrorist crime targeting people performing the Friday prayers at Al-Anoud mosque in Dammam,” the provincial capital, he said.

The bomber “detonated the explosive belt he was wearing at the mosque entrance as security officials were on their way to inspect him”, he said, citing preliminary results of the investigation.

The explosion happened just as the attacker’s vehicle stopped at a car park near the mosque, the spokesman said.

IS, in a statement carried by jihadist accounts on Twitter, quickly said the attack was carried out by “a soldier of the caliphate, Abu Jandal al-Jazrawi”.

It said the bomber managed to “reach the target despite heavy protection” outside the mosque.

Friday’s blast came exactly seven days after the jihadist group sent a suicide bomber into another Shiite mosque in Eastern Province, an attack which cost 21 lives.

Sympathisers of the Sunni extremist group were also accused by Saudi authorities of gunning down seven members of the minority Shiite community in an attack last November.

Activist Nassima al-Sada, who arrived at the site after Friday’s bombing, said the assailant blew himself up after security volunteers tried to prevent him from entering the ladies’ section of the only Shiite mosque in Dammam.

Women were not allowed to pray at the mosque this week for security reasons, Sada said.

After the May 22 attack, residents had set up security committees to search those entering mosques during prayers, witnesses said.

They added that the authorities had not themselves brought in any extra security measures around Shiite mosques despite the attacks.

Amnesty International said Friday that Saudi authorities must take “immediate steps” to protect Shiites “from sectarian violence and put an end to decades of systematic discrimination”.

Frederic Wehrey, a Gulf analyst at the US-based Carnegie Endowment for International Peace, told AFP that “the attack may have been calculated to incite greater distrust among the city’s residents.

“I think one dangerous result of these increased bombings is the Shiites’ loss of faith in the security services, potential formation of local self-protection units or vigilantism,” he said.

Most of the kingdom’s Shiite minority live in the wealthy east, but they have long complained of marginalisation.

A Dammam resident told AFP that the Shiite community was angry but would not allow the attackers to succeed in their goal of stoking sectarian tensions.

“From our side, we’ll try not to have these guys succeed in their mission. We will still continue to work hand in hand,” he said.

He reiterated the six-member GCC’s commitment to “uprooting terrorism regardless of its reasons or perpetrators.”

From Cairo, the head of Al-Azhar, Sunni Islam’s top seat of learning, urged Muslims “not to allow themselves to be dragged into plots to inflame sectarian tensions”.

In his condemnation, Sheikh Ahmed al-Tayeb stressed “the sanctity of blood and of the houses of God”, and “respect for the brotherhood of Islam”.

As the bomber struck in Dammam, Saudi cleric Osama al-Khayat, leading Friday prayers in the holy city of Mecca, deplored last week’s attack and urged people to “stand up against … this great sin”.

King Salman has vowed to punish anyone linked to last week’s “heinous crime”.

Saudi Arabia has joined a US-led military coalition against IS in Syria, raising concerns about possible retaliation.

And since late March, Saudi Arabia has also led a coalition in an air war on Iran-backed Shiite rebels in Yemen.