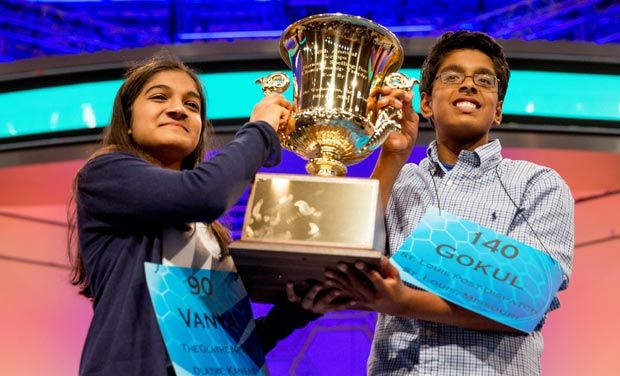 New Delhi: Indian American kids on Thursday maintained their complete dominance in the annual Scripps National Spelling Bee contest by winning the prestigious competition for the eighth year in a row.Â

Vanya Shivashankar and Gokul Venkatachalam were declared co-champions; a feat achieved by Indian Americans for the second consecutive year.Â

In 2014, Sriram Hathwar and Ansun Sujoe were declared the joint winners.Â

This is the eighth successive year that Indian Americans have won the prestigious competition and 13th in the last 16 years.Â

“This is a dream come true. I have wanted this for such a long time,” Vanya said while dedicating the award to her grandmother who passed away in October last year.Â

Appearing for the fifth and final time before the Spelling Bee, Vanya, 13, is eighth grader student from Kansas.Â

In addition to acting, Vanya also plays tuba and piano, and she recently won the Mid-America Music Association award for Exceptional Pianist and Jazz Pianist.Â

An eighth grader from St Louis Missouri, Gokul, 14, said he had worked hard for the contest for the past several years.Â

He takes to spelling like his idol LeBron James does to basketball.Â

In addition to playing basketball, Gokul is a fan of rap and alternative music, counting among his favourite artists Nas, Linkin Park and Macklemore.Â

When he’s not listening to music, he likes to read – his top pick is Life of Pi – or watch his favourite movie, X-Men: Days of Future Past.Â

At school, Gokul is drawn to math and economics.Â

He dreams of attending Stanford University and studying business so that he can become an entrepreneur or a stockbroker.Â

For several years now, Indian-Americans have put up formidable challenges to their competitors and won most of the prestigious spelling awards in the United States.