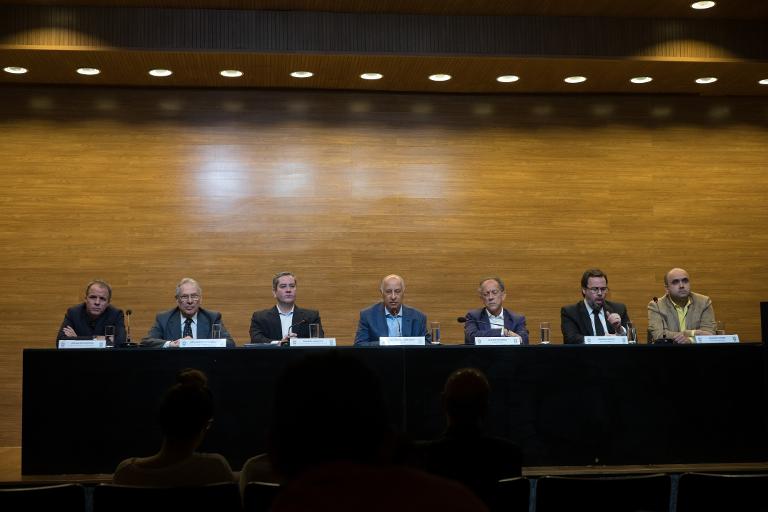 “It’s impossible to resign. I’m not going to resign because I have nothing to do with this,” he told a press conference at CBF headquarters in Rio de Janeiro.

He said it made him “sad” to see Marin, his mentor and former boss, arrested Wednesday along with six other top football officials on US charges of taking millions in bribes.

“It makes you very angry, perplexed because of everything that happened. But we have to look beyond friendship and do our job,” he said.

Del Nero flew home Friday morning from Switzerland, where he had been due to take part in the FIFA vote that re-elected Sepp Blatter to a new term as president of the world football governing body.

He said on arrival he wanted to “clarify” the situation after Swiss police arrested Marin and the other officials in a dawn raid on their Zurich luxury hotel.

Marin, 83, was CBF president from 2012 to 2015, and is a current member of the FIFA organizing committee for the Olympic football tournaments.

Del Nero, who was a CBF vice president under Marin, succeeded him last month, when Marin stepped down and became a vice president.

The CBF has stripped Marin of his post and removed his name from the front of its headquarters building under FIFA’s orders.

Marin, a career lawyer and politician, has had previous brushes with scandal.

In 2012, TV cameras caught him slipping a player’s winning medal into his pocket at a Sao Paulo cup match. He later dismissed the incident as a “joke.”

He has also been accused of supporting Brazil’s military dictatorship as a congressman in the 1970s.

Del Nero, 74, downplayed his own role in CBF business deals as a vice president.

“A vice president isn’t in charge. I tried to the best of my ability to be a good director. I didn’t sign any contract during Marin’s administration,” he said.

He added he would cooperate with investigators, review all CBF contracts and seek to prove the organization’s innocence.

“We must take immediate measures, demonstrate to the investigating agencies the CBF’s willingness to show that there is no dirtiness, nothing attacking us, everything is properly registered,” he said.

Ex-Brazil star Romario, who is today a senator, called for a congressional investigation into the CBF.

“Marin is in jail, and now the time is right to carry out a genuine investigation of the CBF, the thieves’ house of football,” he said.

“Marin was a proven thief. We still have to remove another cancer from football: the current president of the CBF, Marco Polo del Nero.”

Marin dismissed the comments and vowed to take legal action for defamation.