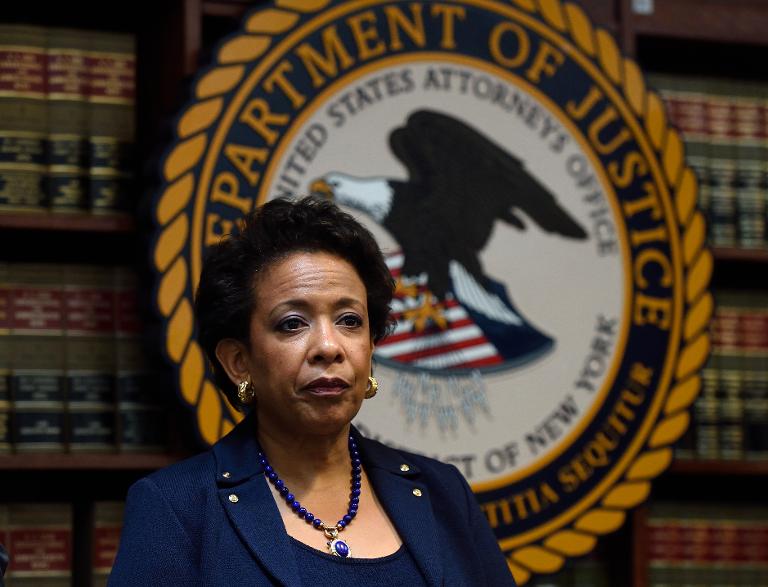 The United States charged soccer officials Wednesday with corrupting a sport loved by billions, warning an investigation has just begun and seeking the extradition of suspects arrested in Switzerland.

The 47-count US indictment charges 14 soccer officials and marketing executives with racketeering, wire fraud and money laundering conspiracies that span 24 years beginning in 1991.

The officials are charged with conspiring to solicit and receive more than $150 million in bribes and kickbacks in exchange for the support of US and South American sports marketing executives who agreed to make the illegal payments.

“They corrupted the business of worldwide soccer to serve their interests and to enrich themselves,” Lynch told a packed news conference in New York.

“This Department of Justice is determined to end these practices to root out corruption and bring wrongdoers to justice.”

Racketeering, the most serious charge, carries a maximum punishment of 20 years if defendants are convicted at trial. Other crimes in the indictment are punishable by up to five and 10 years in jail.

US officials would not be drawn on the possibility of future charges against other senior FIFA figures, and pointedly refused to answer questions about the body’s president, Sepp Blatter.

“It’s a significant step but I want to be very clear, this is the beginning of our effort not the end,” said Kelly Currie, acting US attorney for the eastern district of New York.

Lynch would not comment on the upcoming tournaments in Russia and Qatar, but said: “I think FIFA has a lot of soul searching to do.”

“Two generations of soccer officials,” Lynch said, “used their positions of trust within their respective organizations to solicit bribes from sports marketers in exchange for the commercial rights to their soccer tournaments. They did this over and over, year after year, tournament after tournament.”

Tens of millions of dollars had been hidden in offshore accounts in Hong Kong, the Cayman Islands and Switzerland, said Richard Weber, chief of the US tax agency’s criminal investigation division.

“It was a World Cup of fraud. Today we are showing them the red card,” he said. “It is a great day for the global fight against corruption, money laundering or international tax evasion.”

Citing an example, Lynch said FIFA executives took bribes during the process that awarded the 2010 World Cup to South Africa, the first time that the tournament was held in Africa.

“Even for this historic event, FIFA executives and others corrupted the process by using bribes to influence the hosting decision,” she told reporters.

Court papers allege that South African officials paid more than $10 million in bribes to host the 2010 Cup and handed over a briefcase stuffed with $10,000 stacks of banknotes in Paris.

US papers also allege that an Asian high-ranking official contesting the 2011 FIFA presidential election arranged for envelopes stuffed with $40,000 in cash to be handed to members of the Caribbean Football Union in order to secure votes.

In yet another example, Lynch said $110 million bribes were also paid in preparation for the 2016 Copa America — which is being held in the United States for the first time.

“Our investigation revealed that what should be an expression of international sportsmanship was used as a vehicle in a broader scheme to line executives’ pockets,” she said.

US officials announced that four individuals and two corporations have pleaded guilty. They include a US citizen and a 71-year-old Brazilian sports marketing executive.

US agents also raided the Miami headquarters of CONCACAF, the continental confederation under FIFA in the United States.

CONCACAF promised to cooperate with investigators “to its fullest capacity” and said it was “deeply concerned” by Wednesday’s events.

Lynch said the United States was seeking the extradition of the defendants arrested in Switzerland and the arrest of the others, whom she said abused the US financial system and violated US law.

“We intend to hold them accountable,” she said. “They will receive a fair trial if they are brought to this country.”

The Swiss justice ministry said that six of the seven FIFA arrested officials were opposing their extradition to the United States.