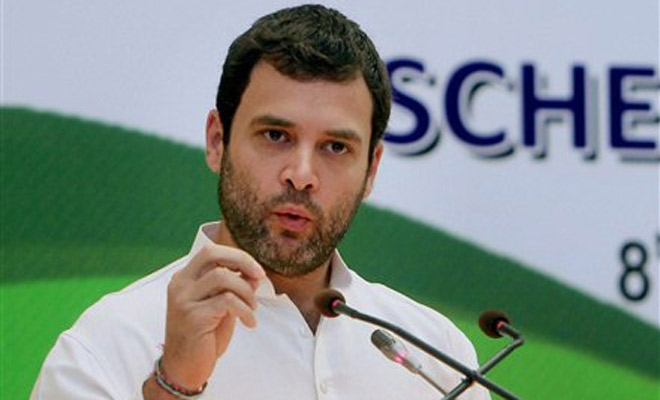 New Delhi: Stepping up the offensive,Â Rahul Gandhi on Thursday hit out at BJP’s ideological mentor RSS saying its belief was “murdering” individuality and that thought process is now running the country in which only one man knows everything from farmers to clothes.

In a brief but sharp speech at the national convention of NSUI, theÂ CongressÂ Vice President also took a dig at the Prime Minister saying after his predecessorÂ Manmohan Singh criticised the health of economy in the morning yesterday,Narendra ModiÂ took “pathshaala” (lessons) from him in the evening.

Gandhi, who had to wait at the dais for some time as the enthusiastic supporters cheered him, said that it took him 10 years to understand that this “disorder” is in the DNA and strength of Congress family and contrasted it with “order and discipline” at RSS shakhas which kills individual thinking.

“You see the shakhas of RSS. There is a straight queue in shakhas. If any one makes a noise there, he will be hit with a baton. Have you talked to any RSS and BJP leader? Discipline is just an excuse for them to murder individuality. And this is the thought process, which is running the country.

Gandhi, who has launched a series of attacks on the Modi government ever since his return last month after nearly a two month break, also alleged that the government was trying to stifle the “internal dialogue” of the country.

“RSS does not allow debate or dialogue. Discipline is used as an excuse to murder individuality and an excuse to silence lakhs of people. They raise their arms like they did in Germany. I won’t even do that,” he said.

Noting that the people of the country have a mind of their own, he said, “We are not alone… Those belonging to the shakhas do not understand this. The entire country is like this. Every person has knowledge, and knows what is good for him. All persons of all religion, caste know it.

Asking the party’s student wing cadres to fight RSS in educational institutions wherever RSS is imposing its ideology, Gandhi said, “Wherever RSS tries to impose its thought process, you stand and stop them. Wherever they want to bring the order of shakha, take the Congress party’s disorderÂ