Home Sports Rossi looks for reversal of fortunes with Lorenzo 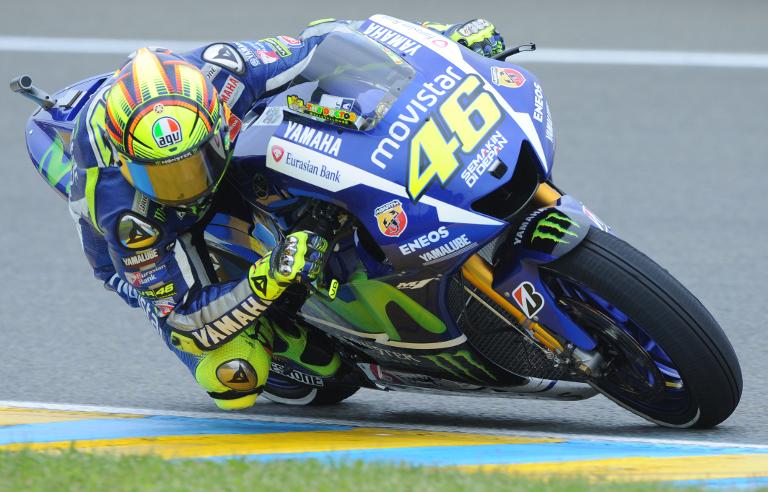 Italian motorcycling legend Valentino Rossi, seeking a 10th world title in all categories, bids to return to the top of the podium in his home MotoGP this weekend.

The 36-year-old Yamaha rider — who won the first two MotoGP of the season but has gone winless in the three since then — has seen team-mate Jorge Lorenzo close in on his lead in the championship by winning the last two races, Rossi finishing runner-up in France last time out.

Rossi leads the standings on 102 points with Lorenzo on 87 and two-time defending champion Marc Marquez, who has struggled thusfar this season after his dominant campaign last year, in fourth 33 points adrift of the Italian.

Rossi, who won at Mugello on seven successive occasions from 2002-08, is determined to reverse the positions in Sunday’s race.

“Arriving at Mugello as the leader in the championship and being in great shape is perfect,” Rossi told the team website.

“We are fast from the start of the season and this is important.

“I really like the Mugello circuit, the Italian Grand Prix is always a nice weekend, but also Jorge loves this track. Jorge and I will try to put our Yamahas on top again, but this time I hope it will be in a reverse order! In Le Mans I struggled a bit, but I still managed to take second.

“At Mugello we must not make mistakes with the setup of the bike, starting from the free practices.”

Rossi has reason to fear Lorenzo as the 28-year-old Spaniard — a two-time champion in this category — also has a superb record on the track having finished on the podium, including three wins, in the last six editions.

“Le Mans was confirmation that I’m feeling stronger and that Iâ€˜m in great shape,” said Lorenzo.

“Claiming a second victory in a row was very important to me and the team in order to know for certain that Jerez (his first win of the season) wasn’t a one-off.

“It is a nice bike to ride and permits me to ride in the manner I like.

“The track (Mugello) is maybe one of my favorites throughout the MotoGP calendar so Iâ€˜m eager to race there.

“In the past I got so many wins in Mugello and itâ€˜s a suitable circuit for both me and the bike.

“Itâ€˜s fluid, with many uphill and downhill sectors and amazing, long high-speed corners.

“I will try to fight again for the podium here and keep this nice momentum going!”

Marquez, who was hindered in the Spanish MotoGP by a broken little finger but then produced a listless performance in the French race, said that things were coming together with his Honda team and they were in great shape to try and put a spoke in Yamaha’s wheels.

“We are very motivated after the weekend in Le Mans and arrive in Italy in good shape,” said 22-year-old Marquez.

“We must work hard from Friday to find a good setup as Mugello is a complicated circuit, however, I like it and have good memories from my first victory in 2010.

“We know Valentino will be very strong at his home race, Jorge and Dani (Marquez’ Honda team-mate Pedrosa) have a good history there and Ducati were testing there just a few weeks ago, so we will have to be focused all weekend.”