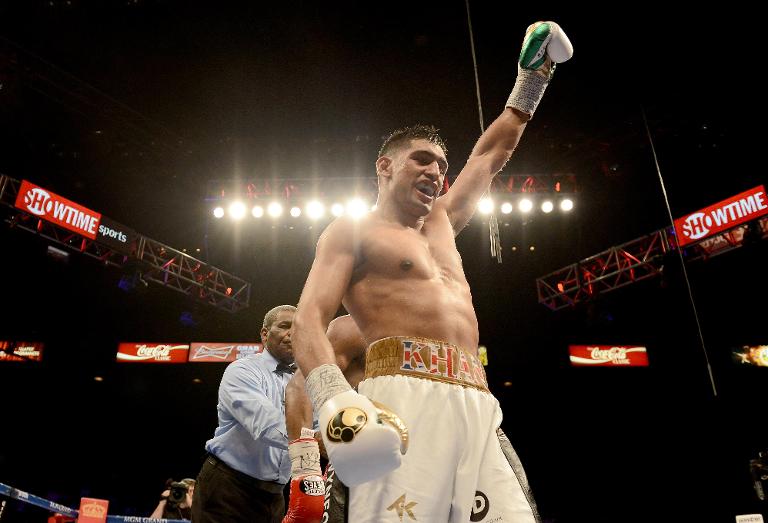 Britain’s former world champion Amir Khan is aiming to punch his ticket to a bout with Floyd Mayweather on Friday with a victory over Chris Algieri in a non-title welterweight fight.

Khan, the former unified light-welterweight world champion who headlines a card at the Barclays Center in Brooklyn, is reckoned to have the inside track on a fight with unbeaten pound-for-pound king Mayweather.

Although he’s been chasing Mayweather for years, Khan insisted he won’t look past Algieri.

“Winning this fight is everything to me. I’m not looking past Chris because I’ve made that mistake in the past,” Khan said this month. “There are bigger fights out there for me, but this is my focus.”

Khan brings a record of 30-3 with 19 knockouts to the bout, his last outing a convincing 12-round decision over Devon Alexander in Las Vegas in December that cemented Khan’s move to the 147-pound welterweight division.

It was his fourth straight victory under trainer Virgil Hunter after back-to-back defeats to Lamont Peterson and Danny Garcia brought a split from legendary conditioner Freddie Roach.

“Virgil Hunter has been great for me as a fighter and he’s helped me really understand the sport of boxing,” Khan said. “I’ve worked on my technique and my defense and really just everything.

“I’m focused on my opponent and I’m not going to make any mistakes.”

“I wasn’t happy with my last performance at all,” said Algieri, who is 20-1 with eight knockouts.

“I know I belong here at the elite level and it’s time for me to prove it.”

While Khan is thought to be the front-runner for a shot at Mayweather — who took his record to 48-0 with a 12-round decision over Pacquiao on May 2 — Algieri believes an upset win on Friday would put him in the frame.

“We’re all fighting for a shot at Mayweather,” he told USA Today.”