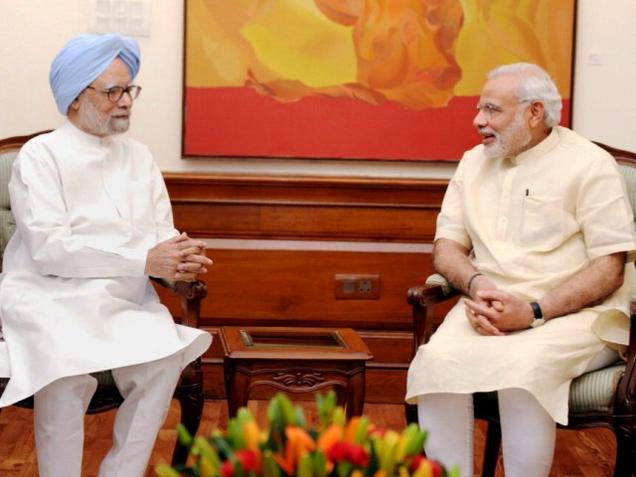 New Delhi: Politics is the only arena where war and pleasantries go hand in glove.

Former PM Manmohan Singh reportedly met Prime Minister Narendra Modi to congratulate him on the completion of one year of BJP-led NDA government at the Centre.

This, hot on the heels of saying that the past was continually being rewritten to promote a “highly biased and communal view” and dissent was being suppressed.

Modi took to twitter to talk about the meeting with Singh writing: “Very happy to meet Dr Manmohan Singh ji and welcome him back to 7 RCR. We had a great meeting.”

Meanwhile, the Congress party said that Singh met the PM at the “invitation of Narendra Modi. They discussed the economic situation in the country and Foreign Policy issues.”

However, what had preceded this cordial meeting was far from pleasant. Earlier in the day Singh had launched a scathing attack on the Modi government.

In an uncharacteristic hard-hitting speech at a convention in the national capital, Singh had said that institutions of democracy were “under threat” and the edifice of welfare state was being “dismantled”, as per PTI.

He had also questioned the BJP government’s claims on economic development, saying rural India was under acute distress and the economic recovery was fragile.

“Institutions of Democracy are under threat. The entire edifice of the welfare state is now being dismantled in the guise of promoting faster economic growth, whereas they are two sides of the same coin. “The past is continually being rewritten to promote a highly biased and communal view… Dissent is being suppressed,” Singh had said.

The Congress party, he added, has tried hard to ensure that India flourishes as an open pluralistic, liberal and secular democracy which was proud of its composite heritage.

“This very idea of India is now under systematic assault. We must understand how this assault is being mounted and then come up with our response,” he had said.

A renowned economist, Singh had also raised the issue of government’s performance on economy to attack it, saying that even government’s own people felt that the recovery is “fragile”.

“Many of our programmes are now being repackaged and marketed as initiatives of the BJP government. What the BJP had opposed when we were in power are now being sold as its contribution,” he had said.

In this regard, he had referred to the Modi government’s ‘Make in India’ programme and said it was “carbon copy” of the New Manufacturing Policy of the UPA government.