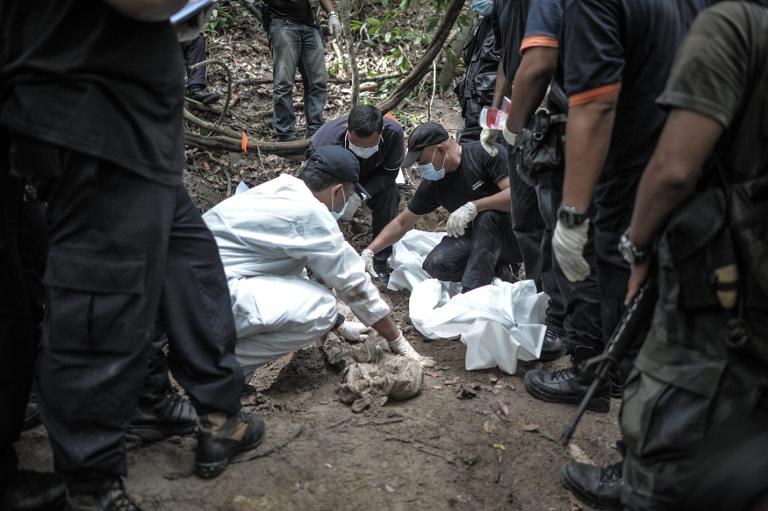 Malaysia said Thursday it believes 139 people are buried in marked graves at remote detention camps used by people-smugglers on the Thai border, with each wrapped in white cloth in Muslim tradition.

The abandoned sites were discovered on the weekend, escalating a crisis that erupted earlier this month when a Thai crackdown on trafficking networks left thousands of desperate people stranded at sea on rickety boats.

Thai authorities acted after discovering some 33 bodies in mass graves in camps in the country’s south, exposing a deadly trade in Muslim Rohingya who are fleeing persecution in Myanmar, as well as Bangladeshis seeking better opportunities abroad.

The camps on Malaysia’s side of the border, which could have been capable of housing hundreds of people, drew allegations that authorities had turned a blind eye to the lucrative business.

“Based on the size of the graves, and after the area was cleared… we have a clearer indication — single grave, single person,” Deputy Home Minister Wan Junaidi Tuanku Jaafar said in the border town of Wang Kelian.

Malaysia has previously said it had discovered 139 grave sites. When asked by AFP if he now believed there were 139 bodies in total, Wan Junaidi said: “Yes.”

Initial investigations showed the bodies were wrapped in shrouds and their resting places marked with wooden sticks.

“It seems like proper burial, the bodies were wrapped in white cloth. It is like the Muslim burialâ€¦ some are shallow graves, not all,” he told reporters.

Malaysian officials had repeatedly denied that such grisly sites existed on their soil, despite activists saying the area was a key transit point for traffickers.

Wan Junaidi defended the failure to detect the camps until now, saying security forces had not been patrolling the jungle-covered area because it was thought to be inaccessible.

Malaysian police commandos began surveying the area after the discovery of the graves in Thailand, he said.

Because the site is so rugged, and reachable only by a long trek through thick jungle, the bodies will likely be recovered from the Thai side, he added.

Since Thailand’s crackdown threw the smuggling routes into disarray, more than 3,500 starving migrants have arrived on Thai, Malaysian and Indonesian soil in recent weeks, and an unknown number of others are feared still trapped at sea.

Relatively prosperous Malaysia has long been a favoured destination for Rohingya seeking to escape discriminatory treatment at home. Migrants often travelled to Thailand by boat, then overland to northern Malaysia.

The latest development in the crisis came as the Dalai Lama urged fellow Nobel peace laureate Aung San Suu Kyi to do more to help the Rohingya.

Despite the wretched conditions they live in, and the crisis that their flight has created, the Myanmar opposition leader is yet to comment. Observers say she is anxious not to alienate voters among Myanmar’s Buddhist majority ahead of elections slated for November.

The Dalai Lama said she must speak up, and that he had already appealed twice to her in person since 2012, when deadly sectarian violence in Myanmar’s Rakhine state pitted the Rohingya against local Buddhists.

“It’s very sad. In the Burmese (Myanmar) case I hope Aung San Suu Kyi, as a Nobel laureate, can do something,” the Tibetan Buddhist spiritual leader told Thursday’s The Australian newspaper.

A Bangladeshi official said Wednesday that the nation plans to relocate thousands of Rohingya who have spent years in refugee camps near the Myanmar border to a southern island.

A Rohingya leader urged the government to rethink, saying the plan would only make life worse for the refugees, who survive in appalling conditions in Bangladesh, living on the margins and running the gauntlet of the country’s authorities.

The discovery of the graves has shone a spotlight on how the mass trafficking could have gone on under the noses of authorities and residents on both sides of the rugged and porous Thai-Malaysia border.

Wan Junaidi on Thursday confirmed media reports that Malaysian police are investigating 12 of their own officers over suspicion of involvement.

The United States on Wednesday backed the investigation, calling for a “transparent, credible and expeditious effort” and urging Malaysian authorities to prosecute those responsible.