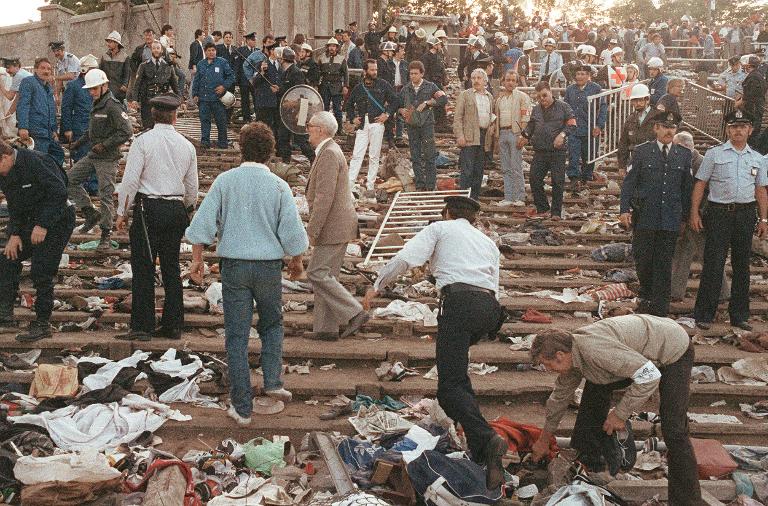 Forever tainted by the deaths of 39 football fans 30-years ago this week there is movement afoot to demolish the old Heysel stadium altogether and build a brand new one nearby.

Back in May 1985 as Liverpool took on Juventus in Brussels in the European Cup final, the now renamed

Roi Baudouin stadium hosted what had been billed beforehand as the final of the Century.

But a deadly cocktail of bad policing, the jaw-dropping violence of a gang of around 200 Liverpool hooligans and a stadium in a bad state of disrepair led to a legacy of infamy.

Panic spread when under-attack Italian fans were unable to escape a terrifying wave of assaults by hooligans due to locked security barriers.

Now 30-years on the subsequent deadly crush is still remembered in Belgium as one of its darkest hours.

Thirty-four Italians, two Belgians, two Frenchmen and an Irishman died, some 458 fans were injured and treated on site, and another 256 taken to hospital.

The hooligans had caused a crush but the policing played its part while it is widely accepted now that Heysel itself has to shoulder much of the blame.

The then police chief talked about piles of rubble strewn about on the terraces which were used as dangerous projectiles.

Juventus won the match 1-0 thanks to a Michel Platini penalty. He would be forever criticised for celebrating that goal. While Liverpool were eventually excluded from European competition for six years.

It would never meet the draconian safety standards now imposed by UEFA as even today after its refurbishment it is unfit to host matches for the Europe-wide Euro 2020, for which Brussels has been chosen to stage matches.

The stadium had already undergone major reconstruction ahead of hosting the 1996 UEFA Cup final between Paris Saint-Germain and Rapid Vienna, and a series of games including a semi-final at Euro 2000, co-hosted by the Belgians and their northern neighbours the Netherlands.

Alain Courtois, one time head of the Belgian football association, a high-ranking regional politician with a role at Brussels town hall as well, wants Heysel demolished.

There are three plans on the table and one of them is a cost-saving project that would see the old stadium originally built in 1930, once more renovated.

Instead Courtois, also well known as a football pundit on radio and television, favours a fresh start.

His preference would be to raise a new stadium to serve not only the national team, currently ranked by FIFA as number three in the world behind only Germany and Argentina, but also to house the celebrated Brussels football club Anderlecht.

“It would be a good idea to have one large football stadium in Brussels that can be used by Anderlecht and the national team. Fifty thousand seats would be a nice capacity,” Courtois told the Belgian press as he seeks to have a dual-purpose stadium built on the old Heysel car park.

“The current Heysel area might be converted to a residence area, but it’s also ideal to develop a new stadium project.”

Not everyone agrees with Courtois and his role as CEO of Anderlecht muddies the waters.

But as organiser of Euro 2000 and ambitions bids for World Cups in the pipeline a clean break with the past seems a viable option for Belgian football and the city of Brussels itself.