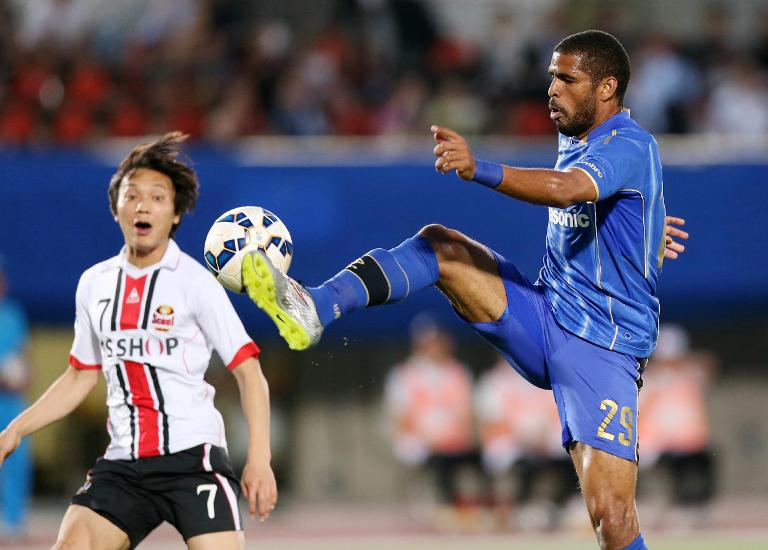 Gamba Osaka of Japan and Guangzhou Evergrande of China booked their places in the quarter-finals of the Asian Champions League Wednesday after the two former champions defeated South Korean sides FC Seoul and Seongnam FC in the Round of 16.

Japanese treble winners Gamba beat Seoul 3-2 at home to complete a comprehensive 6-3 aggregate victory while a brace by Ricardo Goulart saw Chinese champions Guangzhou down Seongnam 2-0 for a 3-2 aggregate triumph.

Those results leave K League Classic champions Jeonbuk Hyundai Motors as the only Korean club in the last eight of the competition after Suwon Samsung FC were eliminated by Japanese side Kashiwa Reysol on Tuesday.

Takashi Usami had scored twice in Gamba’s 3-1 victory in Seoul and the forward played a key role in the opening goal for the 2008 champions at Expo ’70 Stadium, drawing several defenders before dinking over a cross for Patric to head home after 16 minutes.

Mauricio Molina dragged a penalty kick wide three minutes before half-time and that miss would prove even more costly when Gamba struck again in the final minute of the first half through Shu Kurata.

Yun Ju-Tae gave 2013 runners-up Seoul a glimmer of hope when he turned in Shim Je-Hyuk’s cross in the 58th minute but substitute Lins put the game to bed by heading in Hiroko Fujiharu’s cross four minutes from time.

Yun grabbed his second of the game in stoppage time for the well-beaten Korean side.

At the Tianhe Stadium in Guangzhou, the home side had to come from behind after conceding a late penalty in a 2-1 loss to Seongnam in the first leg.

But the 2013 champions got a spot kick of their own when Huang Bowen’s shot struck the elbow of Kwak Hae-Seong and Goulart converted the resulting penalty in the 27th minute to level the aggregate score and put his team on top on away goals.

Goulart would wrap things up in the 57th minute as the Brazilian headed in Zheng Long’s corner for his tournament-leading eighth goal to send Guangzhou into the quarter-finals for a fourth consecutive year.

The all-UAE Round of 16 clash between Al Ahli and Al Ain proved to be a thriller with Ahli progressing to the quarters on away goals after the match ended 3-3.

Neither team had managed to score in the first leg leaving the match wide open.

Ain had the home advantage with the match being played at the Hazza Bin Zayed Stadium and they took a very early lead as their Ghanaian striker Asamoah Gyan scored in just the fourth minute of the game.

But then Ahli produced a stirring fightback in the second half to score three goals in six minutes to turnaround their fortunes.

Defender Salmin Khamis scored the first goal for Ahli in the 51st minute and then skipper Ahmed Khalil scored a brace and Ahli were now 3-1 up after 57 minutes.

Ahli tried to launch a fightback of their own with Gyan scoring his second in the 78th minute and then substitute Rashe Eisa scored in stoppage time but they couldnâ€™t find the winning goal and Ahli progressed to the quarter-finals for the first time.

In the other match it was Iranâ€™s Naft Tehran who notched up their first quarterfinal appearance, on away goals, after their match with Saudi Arabiaâ€™s Al Ahli ended 1-2.

Tehran had a one goal advantage from the first leg and it was them who again shocked the hosts to score the opening goal through Leandro Padovani in the 31st minute.

Ahliâ€™s Omar al Soma scored twice but it wasnâ€™t enough despite having Tehran on the ropes most of the time and having eight minutes of stoppage time.