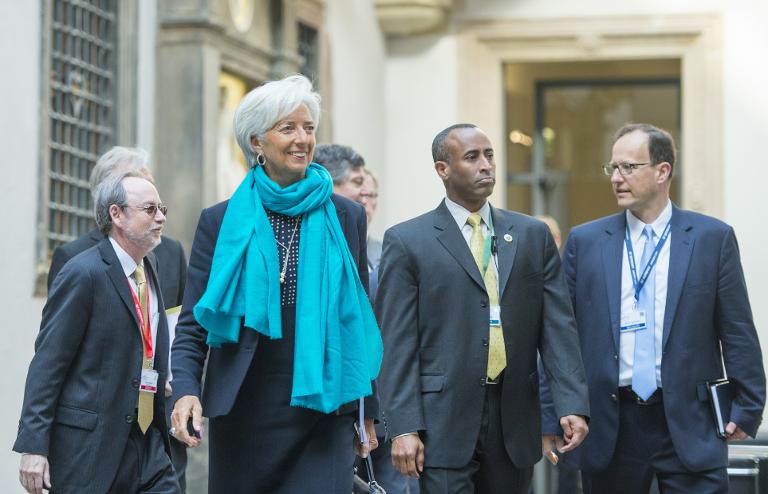 Finance ministers and central bank governors of the Group of Seven wealthiest nations gathered in Dresden Thursday to discuss the global economy and tax evasion, but the Greek crisis was also high on everyone’s minds.

German Finance Minister Wolfgang Schaeuble and his counterparts from Britain, Canada, France, Italy, Japan and the United States began the three-day meeting with a short ceremony on Wednesday evening in Dresden’s rebuilt Frauenkirche church, before they were scheduled to get down to the nitty gritty of talks on Thursday.

The Frauenkirche was almost totally destroyed in the bombing of Dresden by the British and US allies during World War II and the remaining ruins were left as a war memorial for more than 50 years.

But it was painstakingly rebuilt following German unification and finally reconsecrated in 2005.

Germany currently holds the rotating G7 presidency and has been at pains to stress that the Greek crisis is not officially on the agenda.

Berlin insists that the G7 is not the correct forum for the Greek dossier, not least because Athens is not represented.

But with all of the other key actors present — notably International Monetary Fund chief Christine Lagarde, Eurogroup president Jeroen Dijsselbloem, European Central Bank chief Mario Draghi and EU monetary affairs commissioner Pierre Moscovici — it would be hard to believe that the subject will not be broached.

Furthermore, Athens said Wednesday it was close to a loan deal with its creditors that would unlock badly-needed bailout funds for its struggling economy.

Nevertheless, G7 host Schaeuble denied there had been any new significant breakthroughs.

Discussions “have not really progressed much further,” he told ARD German public television on Wednesday evening, adding that he was “also a bit surprised that Athens is always saying that a deal is imminent.”

But it is not just the Europeans who insist that Greece’s fate in the eurozone is a matter of urgency.

IMF chief Lagarde, interviewed by German television on Thursday, said there was “still a lot of work to do” and no “substantial result” had yet been achieved.

She also rejected Athens’s recent accusation that the IMF was making the negotiations more complicated, insisting that her organisation worked in a “balanced and respectful” way.

“Everyone has to double down, and treat the next deadline as if it’s the last deadline and get this resolved,” said US Treasury Secretary Jack Lew.

“The risk of going from deadline to deadline only increases the risk of an accident,” Lew said in London before heading to Dresden.

His Canadian counterpart Joe Oliver also said that “the Greek fiscal crisis is as yet unresolved.”

On global economic matters, Berlin has said it is hoping for “an in-depth exchange of views”.

For the first time at a G7 finance meeting, a number of the world’s leading economists and monetary policy experts are among those invited.

Economists such as Nouriel Roubini, Kenneth Rogoff and former US treasury secretary Larry Summers, will all take part in a symposium organised for Thursday morning.

The French government said it expects the United States to come to Dresden asking the Europeans to do more to get the global economy moving again and redress trade imbalances, such as the high surpluses of countries like Germany.

The G7 ministers will also examine the current high level of volatility on the financial markets and discuss issues such as financial regulation, tax evasion and the battle to cut off financing to terror groups like the Islamic State.

A French source said that the possible emergence of financial bubbles was also a matter of concern.

The Chinese currency, the yuan or renminbi, could also feature in discussions, as Beijing continues to push for it to play a greater role in the world financial system, such as being included in the basket that makes up the IMF’s own “special drawing rights” reserve currency.

Washington has long claimed that the yuan was manipulated, but the IMF said on Tuesday that the currency is “no longer undervalued”.

Contrary to past practice, the German government does not plan to issue a final communique when the meeting wraps up on Friday.