Home Politics Rijijus beef with not eating beef: My Choice 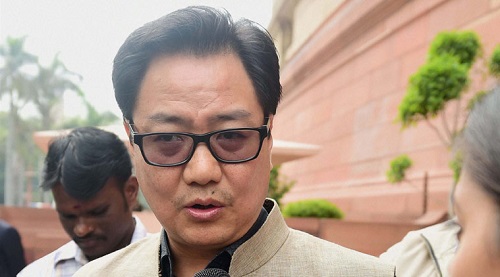 Addressing a press conference after arriving in Aizawl for a two-day maiden visit after becoming Union Minister, Rijiju said that while states having Hindu majority could enact legislation banning cow slaughter, it could not be imposed on north eastern states where majority of the people are eating beef.

“I eat beef, I’m from Arunachal Pradesh, can somebody stop me? So let us not be touchy about somebody’s practices,” Rijiju was quoted as saying.

Terming the recent statement of Naqvi as “not good”, he, however, said that the Minister was using his freedom of speech and expression.

Â He said that the cultures, traditions, habits and sentiments of all the people in the country should be respected and honoured. Rijiju said his ministry thought that the rehabilitation and resettlement package for the repatriated Bru families was good enough.

Â Few days ago, Union minister Mukhtar Abbas Naqvi had asked that those “dying” to eat beef to leave for Pakistan.

However, later he defended his remarks by saying faith of millions should not be hurt over choice of eating.

“This is not a matter of controversy. If one talks about cows, definitely crores of people revere it, they worship it and call it ‘Gomata’. I am a Muslim and in my locality if somebody says that I will sell pork, I will not say anything but all the Muslims in that locality will throw him out.”

“In Islam, pork is prohibited. That is why it should not be sold or even seen. How can one think that when such a large section has faith for cow and worships it, you expect to cut it in front of them and a legal suit is given to it…One has to think about this issue,” Naqvi said.

Disapproving his ministerial colleagueÂ Naqvi’s remark, Finance Minister Arun JaitleyÂ had said, “It is natural that people should realise their responsibilities. The Prime Minister has also said so time and again.”