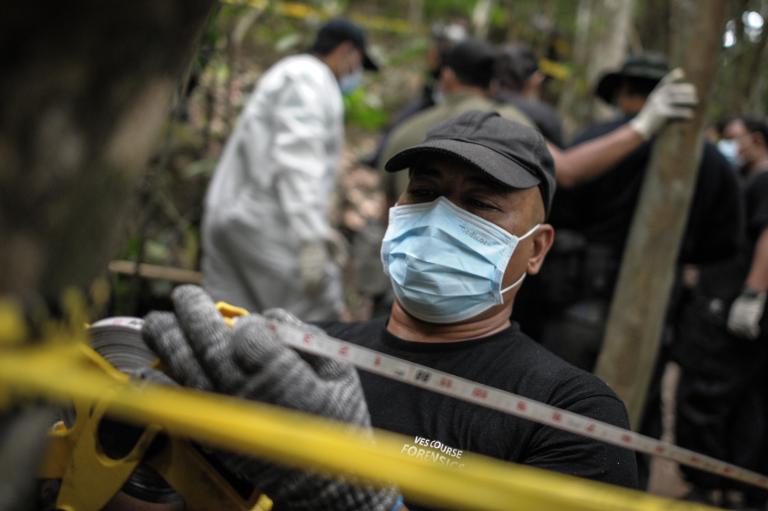 More than 3,500 Bangladeshi economic migrants and stateless Rohingya from Myanmar have arrived on Thai, Malaysian and Indonesian soil in recent weeks.

South Africa’s Archbishop and Nobel Peace Prize laureate Desmond Tutu called Tuesday for international aid to Myanmar to be linked to the plight of its persecuted Rohingya Muslim minority, who have fled the country in droves.

“We have a responsibility… to adopt a common position making funding the development of Myanmar conditional on the restoration of citizenship, nationality, and basic human rights to the Rohingya,” he told an Oslo conference.

Myanmar’s government sees its 1.3 million Rohingya as illegal immigrants from neighbouring Bangladesh, denying most of them citizenship.

A rally by Buddhist nationalists is planned Wednesday in Yangon to protest against international pressure to provide aid to them.

The fate of those who decide to flee was brought into sharp focus at one of the dozens of remote people-smuggling camps in northern Malaysia Tuesday. Reporters saw police dig up a grave, pulling out a corpse apparently wrapped in a Muslim shroud.

“We have found 37 graves (at the one camp) but we have only recovered one body so far,” said local police official Muhammad Bahar Alias.

The mountain camp seemed largely to have been picked clean of most evidence indicating what went on there, but on the ground lay a human lower jaw with several teeth still in it.

The discovery of similar sites in Thailand in early May prompted a Thai police crackdown that severely disrupted the steady flow of migrants from Bangladesh and Myanmar down through Thailand and across the land border into Malaysia.

Malaysian police said it remained unclear how many bodies were buried in the inaccessible corner of mountainous jungle just a few hundred metres from Thailand.

But the findings appeared to indicate a system of camps and graves larger than those over the border.

Before the discovery of the graves, government officials had dismissed the suggestion that such sites existed on Malaysian soil.

But Home Minister Zahid Hamidi said Tuesday the government now suspects human-traffickers and enforcement officers could be in cahoots.

“Our investigations showed that they are collaborating with each other, not only (locally) but they have international links including Thai, Bangladesh and Myanmar,” the Malaysian Insider news portal quoted him saying.

Malaysian police have said the camps were discovered in operations launched following the Thai discoveries, and that they were occupied perhaps as recently as two weeks ago.

Several Malaysian villagers had told AFP on Monday that bedraggled Bangladeshi and Rohingya migrants begging for food and water had become a common sight in the area weeks before the current crisis erupted.

Along with Indonesia and Thailand, Malaysia’s government has long been accused of not doing enough to stop illegal migration and human-trafficking that puts poor and vulnerable migrants at risk of exploitation, extortion and death.

Thousands of boat people are still believed stranded in the Bay of Bengal and the Andaman Sea after the recent crackdown in southern Thailand prompted traffickers to abandon their ships or hide in international waters.

Thailand said Tuesday it had begun air missions looking for stranded migrant boats in the Andaman Sea, following criticism that regional nations were not actively searching for vessels.

The United States confirmed it had begun its own flights off the west coast of Malaysia and had offered to launch more over the Bay of Bengal.

The UN estimates around 2,000 migrants are still trapped farther north in the Bay of Bengal on vessels controlled by people smugglers — who were put off from making the journey southeast but have refused to release their victims unless relatives pay a ransom.

Activists say the trade thrives likely with the help of corrupt Malaysian and Thai officials.

Thailand is hosting a regional meeting Friday in response to the crisis.

The International Organization for Migration appealed Tuesday for $26 million to help migrants in Southeast Asia.

“There is no doubt that these people have suffered unimaginably and for a protracted period,” said Jeff Labovitz, its chief of mission for Thailand.