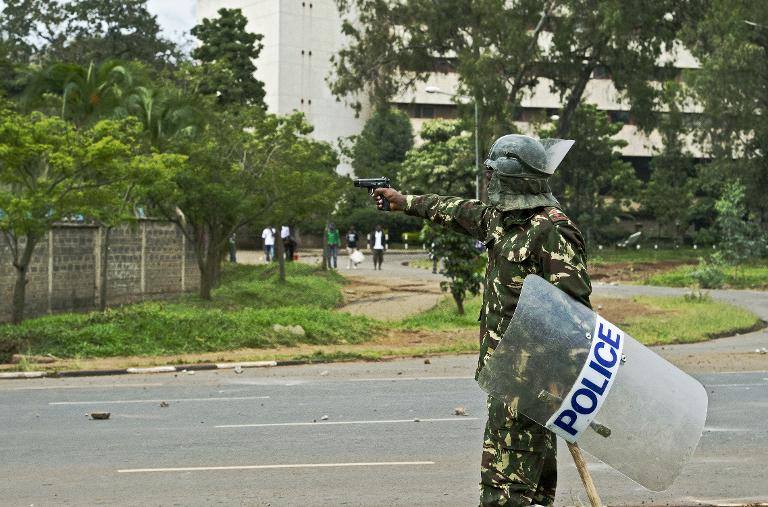 Kenyan police said Tuesday they were engaged in a major security operation against Shebab militants after an ambush close to the scene of last month’s university massacre in Garissa left one officer dead.

The Somali-led Al-Qaeda branch staged an attack against police in the tense border region late Monday, claiming they had killed 20 police in a bomb attack followed by an ambush close to the village of Yumbis, about 80 kilometres (50 miles) northeast of Garissa town.

But Kenyan police said in a statement that only one officer died and four others were wounded, with Interior Minister Joseph Nkaissery dismissing claims of numerous fatalities as “propaganda”.

Police and the army were “now in control of the situation and a massive operation is ongoing,” Kenya’s police inspector general, Joseph Kipchirchir Boinnet, said in a statement.

“All officers have been accounted for following the ambush by the terrorists,” he said, confirming that one officer had died from his injuries and four others had been wounded.

The attack came just days after extra Kenyan security forces were deployed in the area to strengthen security after a series of raids by the Shebab.

Garissa County has remained volatile with numerous attacks since last month, when four Shebab militants stormed Garissa University College, killing 142 students and six members of the security forces during a day-long siege on the eve of the Easter weekend.

It was the group’s deadliest attack in Kenya to date.

On Monday a group of police were ambushed as they went to assist other police who had been targeted by an explosive device, believed to be a landmine or improvised roadside bomb.

“Mujahedeen fighters conducted a successful attack on the Christian troops of Kenya and the death toll is more than 20, five vehicles were also burned down,” Shebab spokesman Abdulaziz Abu Musab said in a statement posted on a pro-militant website.

Kenya media and local officials initially said that between 10 and 20 police were killed, while a police spokesman had said 13 officers were missing — although Garissa County Commissioner James Kianda contradicted that account and said all officers had been accounted for.

Yumbis was the scene of an earlier clash between the Shebab and Kenyan security forces last week, just days after militants briefly took control of a mosque in the area, delivering a hardline sermon to captive worshippers before leaving.

Once a Somalia-focused insurgent group, Shebab has in recent years turned its attention to Kenya, demanding it withdraw soldiers who were deployed to Somalia in 2011, and launching a series of attacks including the 2013 assault on Nairobi’s Westgate mall that killed at least 67 people.

It remains unclear if the latest string of attacks have been carried out by Shebab units based in Somalia, or the group’s cells inside Kenya — where the militants have stepped up recruitment and operations.