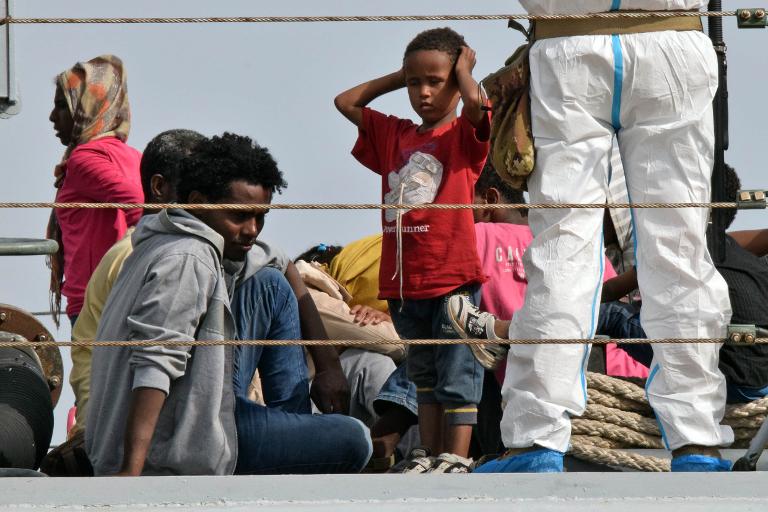 The European Commission is due Wednesday to unveil its latest version of a controversial plan to force EU member states to more evenly absorb the wave of migrants making the dangerous crossing of the Mediterranean to Europe.

UN chief Ban Ki-moon was also due in Brussels after urging Europe to do more to help migrants and after the EU has sought UN Security Council approval to launch a naval operation against migrant smugglers.

The commission, the executive of the 28-nation EU, will ask member states to share the burden of admitting tens of thousands of asylum seekers who land in Italy, Greece and Malta.

“The proposal is not perfect, but it amounts to an enormous step forward, because it introduces the principle of solidarity,” EU foreign policy chief Federica Mogherini said Tuesday.

“We will have to build a consensus” around the relocation proposal for asylum seekers “so that interior ministers can approve it” by a simple majority when they meet June 16 in Luxembourg, she added.

The task is bound to be particularly difficult because Britain, Hungary, the Baltic states, the Czech Republic and Poland oppose mandatory relocation based on a redistribution “key” system.

The relocation plan is to allow for the transfer to other states of people eligible for international protection. It opens a breach in the Dublin rules that require the country where asylum seekers first land to take them in.

The measure aims to respond to an “emergency,” according to the commission, which fears the arrival of a wave of migrants and asylum seekers during the summer in Italy, Malta and Greece.

Around half a million migrants could attempt to cross the Mediterranean, the UN International Maritime Organization warned in late April.

But the effort to share the burden is due to be limited in time and concerns only new arrivals from the month of July.

EU sources said only a little more than 40,000 people, mainly asylum seekers from Syria and Eritrea, would be redistributed around member states.

“There was never a question of retroactivity,” an EU source said.

Italy alone will be left to deal with the 80,000 migrants and asylum seekers who have landed on its shores and are housed in centres.

France said it was ready to accept a “temporary redistribution mechanism in the European Union for asylum seekers having a manifest need of protection.”

But it “is and remains opposed to any idea of quotas in terms of asylum requests.”

The commission is also due Wednesday to recommend to member states to resettle on their territory over the next two years some 20,000 refugees, mainly from Syria.

The commission is also planning a redistribution key system for refugees, but on a voluntary basis because the proposed quotas are too high for many states.

To start with, Poland will welcome 60 Christian refugee families from Syria, Polish Prime Minister Ewa Kopacz announced. Based on the mechanism proposed by the commission, Poland should admit 962 of the 20,000 refugees.

EU nations already approved plans May 18 for an unprecedented naval mission starting next month to fight human traffickers responsible for a flood of migrants crossing the Mediterranean from Libya.

The scheme backed by foreign and defence ministers in Brussels will involve European warships and surveillance aircraft gathering intelligence and then raiding boats to crack down on people smugglers.

But the EU is still waiting for a UN resolution that will allow it to destroy boats that belong to people smugglers in Libyan waters, where political turmoil has created a safe harbour for traffickers.