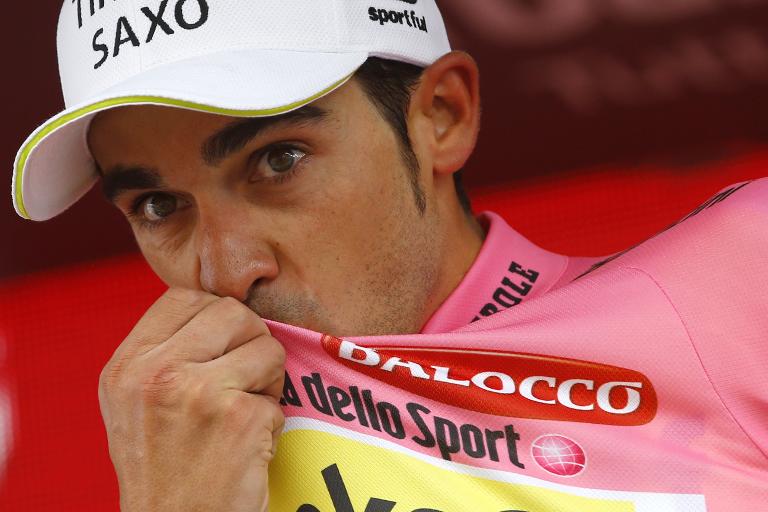 Astana rider Landa made up for team leader Aru’s difficult day as he claimed his second win of the race in clinching the 174km ride from Pinzolo to Aprica in the Italian Dolomites, which took in no less than five categorised mountain passes including the notoriously difficult Mortirolo.

Contador was pleased with his day’s work, which sees him edge closer to fulfilling the first half of his goal in becoming the first rider since the late Marco Pantani to win the Giro and Tour de France in the same year, but was full of praise for the stage winner.

“To Mikel Landa, I can only say: hats off. These are the stages that people remember,” said the 32-year-old Spaniard.

In what proved to be another small humiliation for his team leader Aru, Landa came over the finish line in 5hr 02min 51sec to move up to second place overall at 4min 02sec behind Contador, who settled for third place at 38sec behind on the wheel of Dutchman Steven Kruijswijk.

Aru finished nearly three minutes off the pace to drop to third at 4:52 behind Contador, raising further doubts about Astana’s leadership with several mountain stages on the menu before Sunday’s final ride to Milan.

On what was billed as the ‘Queen’ stage of the race, Contador emerged a step closer to his second pink jersey after Astana ultimately paid the price for attacking the Spaniard when he suffered a puncture on the descent of the Aprica, with a little over 60 km remaining.

Astana and Katusha pounced on Contador’s misfortune to join forces and open up a gap, which soon left the Spanish race leader a minute down on the stage.

“We saw that Alberto had a problem, and Katusha went full on the gas, so we worked with them,” Landa said.

But with the Mortirolo to come and Contador having raced the notorious climb on his way to overall victory in 2008, Aru was a long way from safety.

“On the Mortirolo, Fabio Aru wasn’t feeling good and he told me to go with Contador and Kruijswijk,” revealed Landa.

Astana had worked hard to increase their advantage by the start of the 11.8 km climb to the summit. Contador was 50secs behind and, more worryingly for the Spaniard, totally on his own after losing his teammates one by one.

But it was a thrilling ride from Contador as he showed his staggering strength.

“I had a puncture on the descent, Ivan Basso gave me a wheel, but ahead they were going at full speed, and it was impossible to close the gap immediately. It was hard for me, but I’m very happy with the time gaps now,” said the Spaniard.

Contador set about cutting his way through the stragglers dropped from the earlier front group. Although Aru was forging on with Landa and Dutchman Kruiswijk, the Italian was soon to be left on his own too.

Contador finally closed the gap 5km before the summit, prompting Landa — who appeared much fresher than Aru — to counter the Spaniard and leave his tiring team leader behind, alone and isolated, when Contador threatened to ride away solo.

By the summit, Contador, Landa and Kruijswijk held nearly a minute’s lead on Yuri Trofimov and Ryder Hesjedal, with Aru’s deficit now at nearly two minutes.

The gaps remained largely the same after the descent, with Aru suffering his own mechanical problem and requiring a change of bike before the long ride through the valley towards the foot of the final climb to Aprica.

Aru fought to limit the damage, but the grimaces on the Italian’s face spoke volumes. Up ahead of him, Landa pulled ahead of Contador and Kruijswijk in the final metres of the race to put a silver lining around Astana’s now seemingly doomed bid to top the race podium on Sunday.